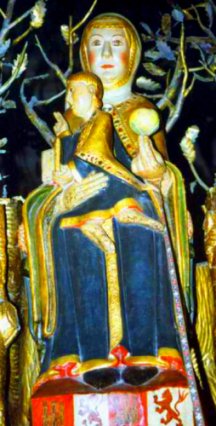 September 23: Our Lady of Valvenere, Spain

This image is a replica of the original which appears to have dated from the tenth century and is preserved in the Royal Abbey shrine of Our Lady of Valvanera, or Valvanere, in Rioja, jealously guarded by Benedictine monks. The oldest documents preserved date from the thirteenth century, and tell how, according to tradition, the original image was found by a thief who later converted and became a hermit.

There was a thief named Nuno Onez, who was a hardened criminal and a “man of licentious life and dedicated to looting.” One day, however, upon hearing the prayer of a man who was to be his next victim, he was touched by Divine grace and repented of his many crimes, turning to the Blessed Virgin Mary to help him change his life. One day while he was praying an angel appeared to him to tell him to go to Valvanera and search for an oak that stood out from the rest, with a fountain that gushed at its feet and surrounded by swarms of bees. There, in the branches of a strong and noble oak, in the presence of a fountain of pure and clear water, the trunk of which was overflowing with the sweetness of honey, he would find an image of the Mother of God, the Blessed Virgin Mary.

Nuno went to the place with a priest on the following Sunday, and found the image, just as the angel had said. The statue had probably been hidden there when the Moslems invaded the Iberian Peninsula in the 8th century. In that place, in the last third of the ninth century, he began to build a place of worship that became known as the chapel of Santo Cristo. Soon there was a small group of hermits who met to pray about this image, men who eventually adopted a regular life inspired by the rule of Saint Benedict. Thus, this small shrine is believed to have given rise to the Monastery of Valvanera, where the Virgin is currently venerated.

Valvanera Monastery is surrounded by a forest near the town of Anguiano in the valley of the Sierra Demand La Rioja. Its name derives from the Latin “Vallis Venaria,” which literally means: “Valley water veins.” The first Abbot was a man named Don Sancho in the year 990.

Our Lady apparently has a preference for oak trees, since this is one of several statues found in or on an oak tree. On that very spot today is seen the magnificent church which Alphonsus IV, King of Castile, built in honor of the Mother of God in 1073, and which houses the image.

She, the valiant woman of Scripture, desired her children, her clients and her devotees to share in a spiritual manner, in the strength and the power of this mighty tree, which is certainly a symbol of her.