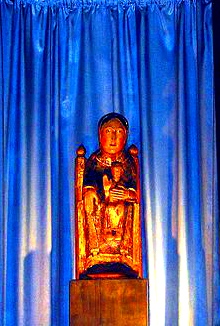 Our Lady of Tongres, in the diocese of Cambray. This image, in the year 1081, was taken into a garden, where the bishop of Cambray had a church built.

Our story goes back to the First Crusade, and concerns a knight by the name of Hector, who becoming blind while on a crusade, was obliged to return home.

One night in the year 1081 while Hector was living in retirement in Tongres, angelic voices were heard in the garden of his castle, and lights were seen among the shrubs. The next morning his servants found in the garden a lovely statue of Our Lady. He ordered it brought into the castle and had it set up in his private oratory. Here he prayed all night before it, and arranged a procession on the following day in honor of the Royal Visitor.

That night the statue disappeared, only to be found on the following morning in the garden. Hector gave orders that it was to be covered with a shelter, and sent word to the bishop of the place to ask what to do about it. The bishop came himself, and convinced that the oratory was the place for the statue, had it moved. It returned that night itself to the garden.

The bishop offered Mass at an outdoor altar the next day, and authorized the knight to build a small chapel there. It became a popular shrine of the neighborhood.

In 1090, King Phillip of France, at war with the Flemish, was camped near Tongres. An angel appeared to Hector in sleep and told him to go to the aid of the King of France. Hector roused his servants and to their terror ordered them to bring out his armor and his sword and arm him for the battle. They set out dubiously to accompany him to the camp of the French King.

The armies drew up for battle on the feast of Saint John the Baptist. Hector told his officers to turn him with his face toward Our Lady of Tongres, where his beloved statue was; and in sight of all he recovered the use of his eyes. Hearing of the miracle, the Flemish King and his army fled in terror from an array which seemed to have Our Lady on its side.

After this miracle, Hector spent his entire fortune in enlarging and enriching the shrine. It soon became known throughout Christendom, and was sought by people in trouble, especially in time of plague. A confraternity, enriched with great privileges was established at this time.

During the French Revolution a duplicate statue was kept in the church and the real one of Our Lady of Tongres was hidden in a wall until the trouble was over. The statue was restored to the church as soon as the revolution was past, and it was crowned with special Papal commendation in the year 1881.

Return to Marian Calendar September from Our Lady of Tongres

Return to Titles of Mary from Our Lady of Tongres