Our Lady of Toledo 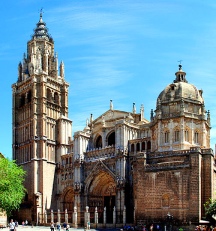 October 25: Dedication of the Cathedral of Our Lady of Toledo, Spain (1070)

The Abbot Orsini wrote: “Dedication of Our Lady of Toledo, in Spain, about the year 1075, by Bernard, archbishop of that city. This cathedral has a revenue of more than 300,000 livres.”

The city of Toledo in Spain was not reconquered until 1085, when King Alfonso VI, King of Leon and Castile, took the city from the Moors. This was an important step in the Reconquista, as Toledo had once been the capital of Visigothic Spain. The city's church had been desecrated and used as a mosque by the Moslem invaders of Spain, but the people had the pleasure of seeing it blessed and consecrated in the year 1087. It was placed under the advocacy of the Blessed Virgin Mary, as King Alfonso wrote:

“I, Alfonso, Emperor of all Spain by God’s Providence, convened with the bishops, namely, that for these ten will I preserve the papal honor of Saint Mary of the City of Toledo, which was formerly the See…”

In 1225 a new cathedral was begun to replace the older one, for which King Fernando III drew up the plans and laid the cornerstone. Fernando’s good friend, the Archbishop Rodrigo Ximenez de Rada, worked very enthusiastically for the completion of the new cathedral where he was bishop.

Our Lady of Toledo

There are so many masterpieces of art and beautiful shrines in the city of Toledo, Spain, that a visitor may easily miss the White Virgin. She stands atop an altar in the choir of Toledo’s magnificent cathedral.

The sacred image of Our Lady is a polychromed alabaster statue of French origin from the twelfth century. Both Mother and Child are clothed in white, their garments bordered with jeweled gold. Their faces darkened by time are framed with curly, strawberry-blond hair.

The statue has also been called the “smiling Virgin of Toledo;” for the Child’s right hand caresses His Mother’s face. She responds with a smile that gives this image its popular name. It is also called the “Virgin of Prima,” and the “Virgen Blanca.”

There is also another artifact worthy of special mention, and that is the ten foot tall great Monstrance of Arfe. It is made of both silver and gold, inset with precious gems. It took nearly 8 years to construct, and is done in a Gothic style that is truly a magnificent work of art.