Our Lady of the Slain

July 31: Our Lady of the Slain, Lorban, Portugal

Our Lady of the Slain, also known as Our Lady of the Murdered, is located at a Cistercian monastery in Ceica, near Lorban, in the country of Portugal.

It is piously believed that this image was brought directly from heaven to be given to the Abbot John, who was the uncle of King Afonso I of Portugal. The statue earned its unique title through many spectacular miracles. It is best known for the fact that life was restored to several persons who had been murdered. Interestingly, in memory of these miracles, those who had been raised from the dead would bear, from that time forward, a red mark upon their throats, like that which was hen seen on the throat of the image. This information comes to us from the Cistercian Chronicles.

King Afonso I, the Conqueror, (also known as Afonso Henriques), was the first king of Portugal and a lifelong sworn opponent of Islam. He spent 46 years as king of Portugal waging war against the Moors in order to drive the invaders from his land.

He was also known for his piety and great love for God. A relative of Saint Bernard of Clairvaux, he bestowed many privileges and benefits to the religious orders and built Alcobaca Monastery for the Cistercian Order.

He was responsible for the foundation of several monasteries and convents, and was favorable especially toward the Cistercians.

Our Lady of the Slain

King Afonso was not a stranger to the miraculous. Before the battle of Ourique, when Afonso was to meet in battle an overwhelming army of five Moorish kings, he prayed that God would give him the strength to defeat his enemies. 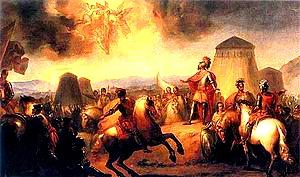 He fell asleep, and in his dream a mysterious old man entered his tent to him to advise him that it was God’s will that he would be victorious in the coming engagement against the Moors. Afterward, he was awakened by his guard, who told him there was an old man waiting outside who wished to speak to him. King Afonso bade him enter, and was started to see it was the old man from his dream.

“Alfonso, have confidence, because you will conquer and destroy these infidel kings, you will smash their power and the Lord will appear to you.”

He then instructed the king to leave his camp that night, without any attendant, at the sound of the church bell ringing from the old man’s hermitage.

It was dark, and the night seemed ominous and strangely vacant when King Afonso heard the mournful toll of the bell. He took up his sword and shield and mounted his horse to ride alone from the camp. A heavy cloud cover blotted out the light of the moon and stars when suddenly an intense beam of light illuminated the night from the East, and in this resplendent light a Cross appeared bearing the crucified Christ. King Afonso dismounted and prostrated himself before the image of the King of Kings when he heard a voice telling him that he would indeed be victorious against the Moors.

Trusting in God, King Afonso went into battle and won an impressive victory against the five kings. It is said that Saint James, the Moorslayer, appeared during the battle to guarantee the victory of the Christian army.

King Afonso went on to win other great battles against the Moors, doubling the size of the kingdom of Portugal that he had founded.

Return to Marian Calendar July from Our Lady of the Slain

Return to Titles of Mary from Our Lady of the Slain