Our Lady of the Silver Foot 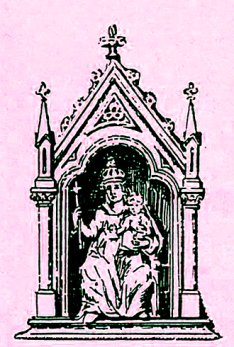 At Toul, in Lorraine, there was a statue, which, according to an ancient tradition, informed a woman on September 20th in the year 1284, of an act of treachery which was being planned against the city.

The statue was called Our Lady of the Silver Foot, or Notre-Dame au pied d’argent in the native French. The faithful keep the memory of this stone statue of the Blessed Virgin Mary, which was located just inside the entrance of the church and placed over a sculpted clam. In those days there would be a lamp burning before it on feast days, and almost every day the faithful offered small candles which they lit and rested on a circular iron candlestick that was placed before the statue. It was well known that several people who prayed before this statue were cured of various diseases, but the devotion and respect of the people toward this image grew more than ever at the time of the Bishop Conrad, because of the miracle that occurred in the following manner:

A woman named Helwide was in the Cathedral Saint-Etienne de Toul praying to the Blessed Virgin for consolation and the repose of the souls of her husband and daughter who had recently died. It was about midnight, when the canons were praying Matins, that the Blessed Virgin Mary suddenly appeared to her.

Our Lady of the Silver Foot

The Virgin Mary ordered Helwide to go immediately to find a man named Rimert, who was the guardian of “The Door to the Chair.” The Door to the Chair gave access to the Castrum, a little entrance to the city near Tanner Street. Helwide was urged to go quickly, for an enemy proposed to enter the city by the door to set their homes on fire and fill the streets with blood.

Regaining her senses after the vision, Helwide got up feeling very puzzled. She was hesitant about what she should do, though as Rimbert’s home was not far distant and was on her way home anyway, she decided she would indeed go there.

No sooner had Helwide stepped out of the church than she met the night-watch on patrol. She told them the tale of her vision, and they responded by mocking her and making derogatory jokes. Despite this, two of them still decided to follow and actually see what would happen if Helwide could find the porter she sought.

The pair arrived with Helwide at the house and simply thrust the door open. Rimbert sat on his bunk, seeming startled, yet as if expecting the visit. Helwide briefly stated the purpose of her visit, and Rimbert exclaimed, “I had precisely the same vision and the same warning! I do not know if it occurred in my sleep or in the state of wakefulness, but I have been told that the statue will move her foot in testimony of the truth!”

At these words, all those present were seized with a great desire to see such a prodigy. With a rush they ran to the Cathedral and removed the candles and all that stood before the image. To their disappointment they found that the Virgin’s feet remained mostly hidden beneath the folds of the clothing of the statue as before.

In the interim, several scholars and some laymen who were called to see the wonder, arrived on the scene. Seeing that nothing was apparently going to happen, they began cursing all the rest as senseless interpreters of dreams. At they stood not far from the statue, many of them fell silent as they saw the statue suddenly move as an entire foot of the Blessed Virgin Mary appeared from beneath the folds of her garment.

Terrified, but convinced, this time they all agreed to announce the peril which they now knew actually threatened them. Quickly rendering their thanks to Mary, they agreed to defend the city and call for reinforcements. They arrived just in time to take up their positions to defend the entrance to the city with the assistance of the Episcopal palace guards.

A tremendous struggle occurred when the butchers broke down the door and entered the courtyard, but the defenders were committed to the fight and held their own. When reinforcements arrived, the invaders fell to the last man.

To perpetuate the memory and recognize the protection granted to them by the Blessed Virgin Mary, the people of Toul had a shoe of pure silver made to cover the foot on the Blessed Virgin’s statue. From that time on the statue was known as Our Lady of the Silver Foot. They also hung on the wall of the cathedral a picture which represented the heavenly vision, and Mary was declared patroness of the city.

The image of Our Lady of the Silver Foot was venerated in the city and the surrounding area, and in case of the threat of any public calamity, the Blessed Virgin was invoked and henceforth the statue would be carried in procession throughout the streets of the city. The magistrates themselves considered it an honor to take the statue upon their own shoulders. Pilgrimages were made to Our Lady of the Silver Foot; prayers answered, graces bestowed and miracles wrought.

The original statue of Our Lady of the Silver Foot was destroyed during the ravages of the French Revolution, and was replaced later by a modern statue that was stolen in the 1980’s. The Gothic cathedral was repaired after being damaged during the French Revolution, but still awaits repair after the damage caused when it was struck during an aerial bombardment in the Second World War. There was once also a monastery at Toul, but no trace of it remains.