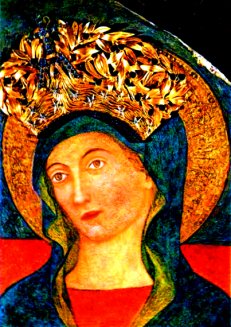 Abbot Orsini wrote: “This image having fallen into a well at the house of Cardinal Capocius, in the year 1250, the water swelled up miraculously, and cast out the image, which the cardinal placed in his chapel. But Pope Innocent IV obliged him to build another on the very spot where the miracle had occurred. This chapel having been given to the Servites, they have had a fine church built, in which the well is enclosed.”

The church of Santa Maria in Via, dedicated to the Blessed Virgin Mary, is also known under the special title of Madonna del Pozzo, Our Lady of the Well. The church that presently stands at the location was built between the years 1491 and 1513, and is not the one originally commissioned in 1256.

The miracle that the Abbot Orsini mentions actually occurred in the year 1256, on the evening of 26 and 27 September. At that time the Cardinal Pietro Capocci had a residence at the location, and one of his servants either accidentally or deliberately, it is no longer known, threw an image of the Blessed Virgin Mary into the well of the stable. The image was painted on a heavy stone tablet, but it never struck the bottom of the well.

Before the image of the Blessed Virgin had gone very far, the water inside the well suddenly rose up and over the top of the well and flowed abundantly in all directions with such force that the image of Mary was suspended upon the surface of the water. The horses were alarmed by the rushing water, bringing the rest of the domestics from their various places to witness the miracle. The image remained where it was until the cardinal himself responded, and with devout astonishment, retrieved the sacred image that appeared to be miraculously floating on the water. Once the image was taken, the water immediately receded.

The first church, Santa Maria in Via, was already built nearby, and was a titular church. It is no longer known why it was so named, but it is known that Cardinal Pietro Capocci had a residence there. When Pope Alexander IV learned of the event, he declared it to have been a miracle and ordered the construction of a new chapel dedicated to the Blessed Virgin. The new chapel was built over the well, and was an annex to the older church. The fountain can still be seen on the right hand side upon entering the church.

It was Pope Innocent VIII who ordered the construction of the church that can presently be seen. In the year 1513 the church was given to the Servites by Pope Leo X, and the Servite Order still remains there to serve the church.