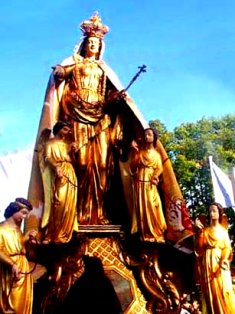 September 6: Our Lady of the Fountain, Valenciennes, France

Valenciennes is a city in northern France on the Scheldt River, and Our Lady of the Fountain was located half a league from the city in the year 1008.

According to tradition, there was a terrible famine that preceded the Plague in that fateful year of 1008. It is recorded that the city of Valenciennes was so ravaged by the plague that nearly 8,000 people died in only a few days, so that the chronicles of the time tell us that it seemed “the dead outnumber the living.” The people grieved profoundly at the spectacle of death which constantly surrounded them, and having no other recourse, went in great crowds to their churches to take refuge at the feet of Our Mother of Mercy and beg for her intercession.

A holy hermit named Bertholin, who lived nearby Our Lady of the Fountain, was touched by the misfortune of his brothers, and redoubled his austerities and prayers. He prayed for the people of Valenciennes, saying, “O Mary! Rescue these afflicted who have cried out to you! Will you let this people die who have called upon you for rescue, and who confide their cares to you? Will you be invoked in vain?”

The Blessed Virgin appeared to the hermit Bertholin while he was fervently praying on the night of the 5th of September. The pious hermit was suddenly dazzled by the brilliance of a light purer than the sun, while at the same time the Mother of Mercy appeared to him with an air of kindness. She commanded Bertholin to tell the inhabitants to fast on the following day, and then pass the night in prayer to bring an end to the Plague. “Go to my people of Valenciennes. On the eve of my nativity they will see the guarantee of protection that I want to give them.”

The response was overwhelming. The people of Valenciennes did as they were told, and on the eve of the Nativity, the 7th of September, the people of Valenciennes stood upon the ramparts and towers of the city excitedly awaiting the fulfillment of the heavenly promise. Their confidence was not in vain, for suddenly the night seemed to turn into day and they witnessed the Queen of Heaven descending to earth in majesty, sparkling like a light of heaven, brighter than the sun. Accompanied by a host of angels, Our Lady seemed to gird the town all round with a cord.

Nothing can convey the feelings of joy and devotion with which the people of Valenciennes were seized at this sight. At one point they all bowed and asked the Blessed Virgin’s blessing. Their Heavenly Mother did indeed bless them, and those who were sick recovered their health, and the inhabitants of Velenciennes have been forever freed from the plague.

The Blessed Virgin instructed the hermit to tell the people that they were to make a solemn procession, and then to do so every year. The people were eager to fulfill this desire of their Heavenly Mother, and left the city singing praises to the Blessed Virgin Mary.

Since that time the procession of Our Lady of Saint-Cordon, or the Tour of the Holy Cordon, takes place every year, always along the same route where the holy cord had been placed. The cord of the Blessed Virgin was locked up in a shrine at a beautiful Gothic church, Notre-Dame-la-Grande.

This cord, the Abbot Orsini related, was still preserved at Valenciennes while he was alive. That is no longer the case, as it disappeared during the Terror that was the French Revolution. The church was sold at auction and then razed to the ground, and the reliquary sent to the mint. Of the Holy Cord nothing is now known, although no one witnessed its destruction when it disappeared in the year 1793.

*from the writings of the Abbot Orsini and other sources. James Fitzhenry, roman-catholic-saints.com, Marian Calendar