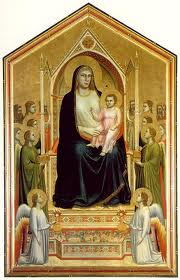 Our Lady of Sasopoli, Italy


The sanctuary of this Madonna, Our Lady of Sasopoli, is some 1700 feet above sea level on one of the hills in the range of Mount Giovi, twelve miles northwest of Florence, Italy.

Many people come to pray at the shrine and among these were two young shepherdesses of the Ricovera family. On July 2, 1490, the two girls were praying at the shrine. As their father was gravely ill, they were imploring the Virgin to restore him to health. They heard a sound and looking around, they saw sitting on a nearby stone a lovely lady with a child in her arms. Before they recovered from their surprise the lady spoke to them. She told them not to be afraid and not to worry, that she was the one to whom they had been praying so fervently, and that she wished to have a church built on that spot in her honor. She asked them to go and bring their father, as she wished to speak to him.

The girls told the lady that their father could not come because he was so sick; he could not even get up out of his bed. But she assured them that he was now well again and that they should go and get him. Obeying, the girls hurried to their home and found their father completely recovered. They returned with him to the shrine; the Lady was still sitting on the stone. She told the father of her wish that a church be built on that spot. The man and his daughters spread the story of his recovery and of how the Virgin had appeared, but very few believed them and nothing at all was done about the church.

Then on August 15, the feast of the Assumption, when a goodly number where gathered at the shrine, the Virgin appeared for the third time. She told them she was displeased at the delay and demanded that they get busy and build her a church.

This time they believed her and started to work. However, since the ground around the stone on which she had appeared seemed too steep to attempt to put a building there, they started to lay the foundation at a place some few hundred feet away. But when the masons arrived for the work the following morning, they found the walls they had laid the day before were demolished and the stones strewn around. After this happened several times, they decided that the Virgin did not want the church built there, but over on the spot where the stone was. So they bowed to the inevitable and with great labor, leveled off the ground around the stone, and there erected the church in honor of Our Lady of Sasopoli.

Since the Virgin had appeared on the stone, and moreover, insisted that the church be erected on that very spot, it was natural the church and the image be called Madonna del Sasso or Our Lady of Sasopoli, Our Lady of the Stone.

Return to Marian Calendar June from Our Lady of Sasopoli

Return to Titles of Mary from Our Lady of Sasopoli