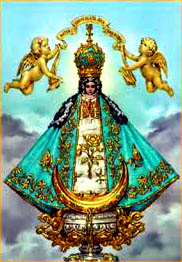 Our Lady of Saint John

(Our Lady of Saint John of the Lakes)


San Juan de los Lagos, or in English “Our Lady of Saint John of the Lakes,” is a famous and miraculous statue currently located in a town of the same name in central Mexico. The statue is small, being about 50 cm tall, and is made of poor materials, with a wood frame and a combination of cornstalks and glue that commonly crumbles into dust after a short time. Still, it is an object of popular veneration for good reason, and for hundreds of years it has been one of the most popular pilgrimage sites in Mexico.

The face of the image is smooth and finely sculpted. The dark brown hair is pulled back from the face. The eyes are large and dark brown, both beautiful and strikingly sculpted for such a small statue. The hands are joined in prayer, with the delicate fingers somewhat separated. Created to be a reflection of Our Lady of the Immaculate Conception, she wears a white gown under a blue mantle.

The first time we hear of the statue is in 1542 when the Spanish priest, Father Miguel de Bologna, brought it with him to the town of San Juan Bautista Mezquititlan, which was then inhabited by Nochiztlecan Indians. The statue was originally kept in a small thatch roofed chapel, although by 1623 we find it and the chapel were personally cared for by Pedro Antes and his wife Ana Lucia, both of whom were elderly Indians.

Ana Lucia, who had a great devotion to the Blessed Virgin, loved and venerated the image, claiming to have conversations with the Mother of God through the statue. Nothing much came of these revelations, though, for no one believed Ana, thinking her experiences only the ramblings of a senile old woman. In fact, by this time the statue was no longer kept in its place of honor above the altar, and had been relegated to a corner of the sacristy where it was nearly forgotten by anyone but Ana Lucia.

This was all to change. Later that same year a man brought his family to entertain the town. They were a family of aerial acrobats, and during their act he, his wife, and their two daughters seemed to fly through the air by the clever employment of ropes, somewhat in the manner of trapeze artists. The act was already dangerous, but to heighten the suspense the entertainers had swords and daggers placed on the ground below the aerialists – with the blades pointing upward.

The youngest child, a girl of only six or seven years of age, fell from a rope while practicing for the upcoming performance and was impaled upon one of the blades. The parents were helpless to save their dying child, for the wound was mortal. Grieving over their loss, the sorrowful parents carried their daughter to the nearby chapel of Our Lady of Saint John to be buried.

Ana Lucia, as caretaker of the chapel, was one of the first to learn about the tragedy. She immediately rushed to the sacristy to obtain her beloved statue of the Blessed Virgin, and soon returned with it in her arms. Encouraging the grief-stricken parents to have faith in God, Ana Lucia explained that this was surely the design of God, and then placed the little statue of the holy Virgin upon the body of their lifeless daughter as Ana began to pray. 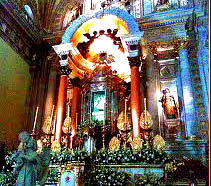 Even though many thought the old woman eccentric, to say the least, none dared to interfere at that moment. Suddenly there was a movement from beneath the burial shroud. All stared mutely at the unmistakable shifting of the little body. Her small voice could be heard to calling for her mother.

Hardly able to believe their eyes, the parents called their daughter’s name as they quickly loosed the child. With her eyes wide open, the little girl sat up and hugged her mother. Not only was she alive, but she was also completely healed.

News of what had happened spread far and wide, and was enough to ignite devotion to Our Blessed Mother through the image of Our Lady of Saint John of the Lakes. Many other miracles followed, and countless prayers were answered through this miraculous image.

The thankful father, feeling indebted to the Blessed Virgin, asked permission to take the statue to Guadalajara where he might find an artist who could restore and dress the statue. The pastor granted the request, and sent a few Indians along to escort the statue. No sooner did they arrive in Guadalajara than they were approached by an unknown man who inquired if they were looking for a capable artist to repair a sacred statue. There was no way he could have known of their mission, so when he offered them his services they believed it was the will of God that his offer should be accepted. A price was soon agreed upon, and the stranger left with the statue. A short time afterward, he returned with the job completed. The statue was cleaned, and the face and hands skillfully restored. After that the stranger left, leaving his identity a mystery. 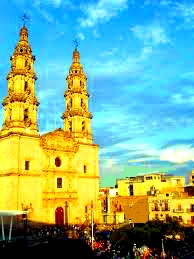 The crowds that came to venerate Our Lady in this image became so large that in 1732 construction began on a new church.


Our Lady of Saint John of the Lakes was installed on a special platform displaying an upturned crescent moon, which is reminiscent of her image of Our Lady of Guadalupe.


In 1904 the Archbishop of Guadalajara, with the permission of His Holiness Pope Saint Pius X, crowned the statue of Our Lady.

Return to Titles of Mary from Our Lady of Saint John

Return to Roman Catholic Saints Homepage from Our Lady of Saint John
[?]Subscribe To This Site