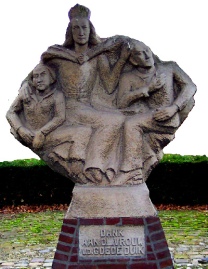 July 22: Our Lady of Safety or of Safe Hiding, Overloon, Holland

This title is a very recent one, having originated in World War II, at Overloon, a small town in Holland, lying about midway between Nijmegen and Venlo, about 30 miles south of Arnhem.

After the German armies had overrun Holland, a great many young Dutchmen fled to escape capture and possible death by the Germans. Many of these young men found a place of hiding in Overloon.

There are stories that several times this little town of some 1700 or 1800 inhabitants, had as many as 200 fugitives, hiding in the homes of the town.

A great many of these refugees who found a hiding place in Overloon, promised the Blessed Virgin they would erect a shrine in her honor if she would help save them.

The battle to free Overloon took place between 30 September and 18 October 1944, and was fought between the Allied forces and the German army. After suffering heavy losses, the battle resulted in an allied victory freeing the town of Overloon from German occupation. The battle had been ferocious, as 2,500 soldiers died at Overloon while the village itself was completely destroyed. For some reason this battle is not much remembered in the Netherlands, even though there is a museum in Overloon where the broken armored vehicles and tanks that had been left behind on the battlefield have been preserved for viewing.

After the war was over and peace came to the country, the Dutchmen who had been hiding in Overloon got together and built the promised shrine at Overloon, dedicating it to the Mother of God under the title of Our Lady of Safety or Safe Hiding. The following is from a translation of the Reuters article of December 4, 1954:

“On Wednesday, December 8, on the feast of Our Lady’s Immaculate Conception, a chapel in Overloon will be consecrated. This simple chapel stands on the road that leads to Limburg, and will be dedicated to Our Lady of Safe Hiding. It was in mid 1942 that the first of those seeking safety from the brutal German occupiers sought hospitality in Overloon. By mid-1944 there were about 200 young men hiding in Overloon waiting for the day of liberation. In one of the forested areas there was even a student camp furnished with tents. This was all possible thanks to the wise and careful planning of an organization then at work, and to the hospitality and silence of the people of Overloon.

In 1945, those who had once been in hiding in Overloon, and who had enjoyed the generosity of the village, gathered funds for a memorial to the memory of those anxious days, and in gratitude to the people whose silence and hospitality had kept them alive. And so now this memorial is erected: a chapel dedicated to Mary, Our Lady of Safety, the patroness of Safe Hiding. The designer of this chapel is the architect Strik, while the famous Brabant sculptor Piet van Dongen created a fine image depicting the Madonna with two young men hiding under her cloak.”

Return to Marian Calendar July from Our Lady of Safety

Return to Titles of Mary from Our Lady of Safety