Our Lady of Rocks 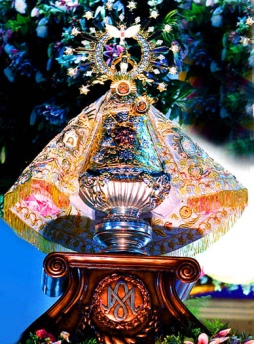 The Abbot Orsini wrote: “Our Lady of Roches, near Salamanca, in Spain; an image is there venerated, which was found miraculously, in the year 434, by Simon Vela, who caused a church to be built there.”

The Simon mentioned above by the abbot Orsini was actually born in the year 1401 in Paris, France. The incident that he states had occurred in the year 434 actually occurred in 1434, but that is getting ahead of our story.

Simon was born on September 4, 1401, in the city of Paris, France, to pious and wealthy parents. Growing up a good Catholic, Simon despised money and luxury, so that when he grew up and inherited his parents’ money and property, he recognized it for the threat to his eternal welfare that it was, and gave all that he owned to the church and to relieve the poor. Once the money was gone, he went to a Franciscan monastery and took a position as a chamber boy.

Simon naturally spent a great deal of time in prayer, and was especially devoted to the Blessed Virgin Mary. Sometimes when he prayed he asked the Mother of God if there was anything he might do that would be especially pleasing to her. On one of these occasions he fell asleep while praying. He was suddenly awakened when he heard a voice speak to him from the empty church:

Our Lady of Rocks, cont:

“Simon, wake up; be on the watch…From now on your name will be Simon Vela. Go to Pena de Francia, for there you will find the shrine of the Blessed Virgin Mary.”

Simon traveled for five years over fields and mountains, searching through lonely valleys and gloomy caves in his quest for this place called Pena de Francia, but he could not even find anyone who had ever heard of the place. On the verge of giving up in frustration, he had already begun working his way back home from Spain when the voice spoke to him from the darkness once again:

Feeling that it was still the will of God, Simon was determined to continue the search.

Simon was passing through the market square in Salamanca on his way to the Church of Santiago when he observed two men who began shouting in a serious disagreement. Weapons flashed, and one of the pair fell wounded at Simon’s feet. The other was restrained from finishing the man by the crowd, who held him back. Unable to reach his adversary, he shouted:

“Had I killed my enemy, I would have escaped to Pena de Francia where no one, not even the king, could find me!”

Simon’s heart leapt for joy when he heard this, for it was the first time he had heard the place spoken of, and now he was certain that his search would not be in vain.

It was a short time later when Simon received a second bit of good news. He was on his way to the church of Saint Martin when he happened upon a travelling merchant. Simon asked the man where he had come from, and he answered Pena de Francia. Thrilled to hear the name, he felt his search was nearly over, but when he asked the man to take him there, he refused. He did not want to go back the way he had come, no matter how much Simon begged him. All he would do was point out the general direction.

Simon went down the road from which he had seen the merchant approach, hoping he was not too far from his destination. The road led him to a villa named San Martin de Castanar, which he reached on May 14, 1434. He found a church there, and after Mass he asked if anyone knew of a place called Pena de Francis. One man knew of it, and when Simon kindly asked him to show him where it was, the man walked with him a good distance from the church and then pointed out a hill in the far distance. That, he said, was Pena de Francia. Simon was elated, thanking God and the man for revealing to him the place that meant the end of his quest.

The place was far off, but Simon went off at once, thinking the years he had spent in seeking were nearly at an end. He gave no thought to his provisions, and as the journey was long and arduous, he was far from any help when he realized how weakened his fast had made him. Suffering intense pangs of hunger, Simon did not despair, for he felt certain that God would not forsake him. He continued on his way, and soon came across an abandoned pack that contained a loaf of bread and a piece of meat. Refreshed, he turned his attention to finding shelter as the night approached. Finding a suitable cave, he went inside and prayed for guidance until he dropped off into welcome slumber.

Waking early in the morning, Simon began to search the area for the shrine, and quickly found that there were caves all over the hill where he had slept. He naturally became discouraged when it became apparent that it could take him weeks or even months to find what he sought, and so, feeling that it was almost as if his quest had started all over again, he fell to his knees and prayed for the grace of perseverance. His prayer was quickly answered, as the now familiar voice said:

Simon got up at once and continued his search, awakening with renewed enthusiasm the following morning. As he prepared to leave his cave a brilliant light struck his eyes, the source of which was a spot some distance away on a rocky hill. Trembling with joy, Simon approached the source of that light and found the Blessed Virgin Mary sitting on a golden throne with the Child Jesus in her arms. His heart overflowing with inexpressible joy, he knelt and said:

“Oh, Lady, dream of my soul, and inspiration of men and women! My labors are now ended. Many years have I traveled far and wide to seek you and to drink in the beauty of your eyes! Do not forsake me, but be my protection.”

“Simon, rejoice! Your constancy will be rewarded. Your dream will be realized. Your labors are now ended. Take heed and keep in your heart what I wish you to do. Dig in this spot and take what you can see and place it on the summit of this rocky hill. Build on this hill a beautiful shrine. You are to begin it and others will come to finish it. This must come to pass as it has been the wish of my child.”

When the vision ended, Simon remained alone for some time, filled with wonder and awe.

On the spot where the apparition of the Holy Virgin had appeared, Simon began the work of excavating. He had barely begun digging when he heard the same voice once again saying:

“Simon, do not attempt to undertake this large of a task alone. Undertake it in the presence and with the help of two, three, or more persons.”

Evidently this demand was made to ward off any suspicion about the veracity of the coming miracle as well as Simon’s credibility. So Simon went back to San Martin de Castanar and asked five men to help him, and all of them agreed.

Even though Simon told them the truth, these men believed that they were digging for hidden treasure. Simon repeated that they were after an objective worthier than merely worldly goods, and that it was something their hearts would forever cherish. They dug for some time, until finally, on May 19, 1434, they removing a huge stone that was barring their way. They found beneath it, sheltered among several smaller rocks, the most coveted image of the Blessed Virgin Mary with the Divine Child in her arms, now known as Our Lady of Rocks.

Our Lady of Rocks