Our Lady of Puig 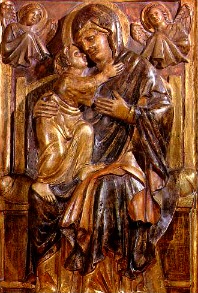 April 7: Our Lady of Puig


The fortress and the church of Our Lady of Puig are a short distance out of Valencia; both date from Roman times, when a temple of Venus stood on the hill overlooking the pleasant valley. At the coming of Christians, it was turned into a monastery.

Early in history they acquired the image of Our Lady of Puig, in bas-relief, carved on a slab of marble, which was said to have formed part of the tomb of the Blessed Virgin Mary. How it got to Spain is not known with certainty, though the pious insist that it was brought there by angels. It was the principal object of devotion at the shrine, which thrived and grew beautiful until the ancient kingdom of the Visigoths fell to the Muslim invaders in the 8th Century.

In the year 712 AD the monks sadly buried their treasure to hide it from desecration, along with the church bell, under the floor of the monastery, and fled for their lives. After five centuries the Moors were expelled from Valencia, and the plaque of Our Lady of Puig played a part in its liberation.

Our Lady of Puig

King Jamie I of Aragon, victorious in other parts of Spain, moved on Valencia with his armies. The Moors, in an effort to trick the Christians into sending their troops to the wrong place, moved to attack the ancient fortress of Puig. This was done with great secrecy, but Our Lady warned the Christians and helped them to win the desperate battle.

Saint Peter Nolasco, who helped to found the Society for the Redemption of Captives under Our Lady’s guidance, was in Puig when the battle took place. One of the soldiers came to him and reported that when he had been on night guard he had seen strange lights over the old ruined church of Our Lady of Puig; sometimes the stars seemed to come down from the sky and circle around the building. Especially on Saturday nights there were bright lights around the mount of the church.

Saint Peter suggested to the king that all the soldiers should receive the Sacraments and pray to know what God was trying to tell them. After this had been done, he led them to the top of the hill and directed them to dig under the floor of the old monastery. Here they found the plaque and the bell, buried for 500 years, but unharmed.

The plaque was first carried to the chapel of the castle fortress. As soon as possible a new church was built on the mountain and given into the charge of the Mercedarians under Saint Peter Nolasco.

The ancient bell which was dated as being cast in 660, and was placed in the tower of the church. This bell was said to be powerful against storms and always rung of its own accord in time of trouble. In 1550 the bell broke and a new one was cast from the fragments of the old one.

The church built by Saint Peter Nolasco was called “the angelic chamber” because angels were often heard singing there in the night, especially on Saturdays.

Our Lady of Puig has been the patroness of Valencia for hundreds of years, and not longer ago than 1935 was honored by the Spanish Armies who have carried her image in so many successful battles. She was at this time named as a General in the Army and invoked as patroness in the Christian War against Communism.