Our Lady of Oviedo 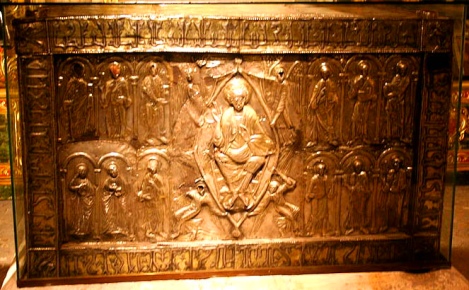 The Abbot Orsini wrote: “Our Lady of Oviedo, Spain, where they possess some of the Blessed Virgin’s hair.”

The Cathedral of Oviedo was founded in 781 AD, and enlarged by Alfonso the Chaste, who made Oviedo the capital of Kingdom of Asturias. The chapel was once called the Sancta Ovetensis, owing to the quantity and quality of relics contained in the Camara Santa (Holy Chamber).

Our Lady of Oviedo

“There is in the city of Oviedo a Holy Chest that contains many and varied relics. It rests in the town where King Alfonso II, the Chaste, built a shrine to house it, and there it can be seen even today as it was well over a millennium ago. Like the Arc of the Covenant, or the Holy Grail, it is a singular thing the like of which is almost utterly unknown in the entire history of mankind.

This Holy Chest is made of oak and was skillfully constructed without the use of any nails. It measures roughly four feet by three feet by two feet, and has been venerated by faithful Catholics since apostolic times. Indeed, it is believed to have been fashioned by devoted disciples of the twelve apostles. Many men and woman throughout history have given their entire lives in service to the holy relics contained therein, or to save the chest from pagans who sought its destruction.

The chest originated in the Holy City of Jerusalem. When the Persain’s attacked and conquered Jerusalem in 614, many priceless relics from the region were gathered and placed in it for protection, as the Persians sought relics to destroy them. The chest was taken for safekeeping to a small community of Catholics in Alexandria, Egypt. A short time later, Alexandria was also sacked by the Muslims, and the chest was taken across the Mediterranean Sea to Spain, where St. Isidore kept it in Seville. Upon St. Isidore’s death, the chest was transferred to the city of Toledo, which was then becoming an important center in Spain. When the wave of Muslim aggression reached even Toledo in 711, the Holy Chest was taken to the Asturias and hidden in a well in Pelayo’s mountain.

The chest has a lock and key, but by the time of the eleventh century it had not been opened for hundreds of years. The last time it was known to have been opened was when it was done by a living saint, St. Ildephonsus, for in it he had placed a chasuble that the Mother of God herself had given him during an apparition.

By the year 1030, the exact contents of the Holy Chest were no longer known. Bishop Ponce of Oviedo, and with him many clerics, determined to examine the chest to unlock its secrets. As soon as the lid was raised only the slightest bit, “there burst forth so stupendous a light that the terrified clerics, some of them stricken stone-blind, dropped the lid and fled, leaving the mystery unsolved.”

After Mass, on Friday, March 13, 1075, the key was again placed in the lock. On this occasion, God was pleased to reveal the contents of the Holy Chest. The chest contained the Sudarium, mentioned by St. John the Evangelist in his Gospel as the cloth that covered the face of Christ after the crucifixion. On it can be seen the bloodstains of Our Lord that evidence his passion and death. It alone is a treasure without reckoning…

The chest also contained a piece of the True Cross of Our Lord, a small stone of the sepulcher in which He was buried, some of the cloths in which He was wrapped in the manger, several thorns from the Crucifixion, a piece of the earth of Mount Olivet touched by His feet when He ascended into heaven, one of the thirty coins given to Judas, the chasuble given by the Virgin Mary to Saint Ildephonsus, a chest of gold and precious stones containing the forehead of St. John the Baptist and his hair, and a host of other relics from many saints and prophets, including St. Stephen, the first martyr, St. Mary Magdalene, St. Peter the Apostle, St. Vincent, and the rod of Moses which parted the Red Sea and the manna supplied from heaven during the Exodus from Egypt, and many other priceless relics.

King Alfonso VI commissioned a silversmith to sheath the Holy Chest in gilded silver, adoring it with figures of Our Lord and His angels and saints. It can still be seen even today.”

*from El Cid, God’s Own Champion, by James Fitzhenry

-Our Lady of Oviedo