Our Lady of Monte Senario 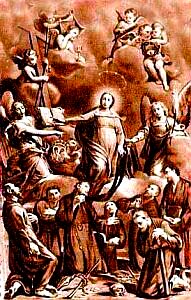 June 19: Our Lady of Monte Senario


The cradle of the order of the Servants of Mary began at Monte Senario in the year 1233 in the city of Florence, Italy, by a group of Hermits now known as the Seven Holy Founders. They were sons from different wealthy families, and they retired from the world for a life of prayer and devotion to the praises of Mary.

Leaving La Camarzia, a suburb of Florence, the seven went to Monte Senario in the region of Tuscany. Uncertain of what way of life to follow, they turned to Our Lady in prayer and supplication, and she appeared to them on the Feast of the Assumption in the year 1240.

The Blessed Virgin, Our Lady of Monte Senario, presented the Seven Holy Founders with the habit of their new order, and an angel stood nearby bearing a scroll that was marked, “Servants of Mary.” He read to the Seven Holy Founders the following words: “You will found a new order, and you will be my witnesses throughout the world. This is your name: Servants of Mary. This is your rule: that of Saint Augustine. And here is your distinctive sign: the black scapular, in memory of my sufferings.”

Our Lady of Monte Senario

From that day in 1240, the seven were known as the Servants of Mary, the Order of Servants of Mary, or the Servites. Members of the order take solemn vows to especially honor the Seven Sorrows of the Blessed Virgin Mary. The sorrows are, in order, the prophecy of Simeon, the flight into Egypt, the loss of the Holy Child at Jerusalem, meeting Jesus on his way to Calvary, standing at the foot of the Cross, Jesus taken down from the Cross, and the burial of Christ.

According to an ancient document called the “Legenda de Origin ordini,” “Our Lady wanted to begin her Order with seven men to show everyone, with absolute clarity, that she wanted to adorn her Order, endowing it with the seven gifts of the Holy Spirit.” The Order gained official recognition in 1249, but was not officially approved until Pope Benedict IX issued a Bull in 1304. Their church on Monte Senario, rebuilt in 1700, is a favorite resort of pilgrims from Florence and further places. Mary, here as Our Lady of Monte Senario, as well as elsewhere, proves herself the miraculous Mother of God.

*from The Woman in Orbit and other sources.

Return to Marian Calendar June from Our Lady of Monte Senario

Return to Titles of Mary from Our Lady of Monte Senario

Return to Roman Catholic Saints Home Page from Our Lady of Monte Senario
[?]Subscribe To This Site