Our Lady of Marienthal 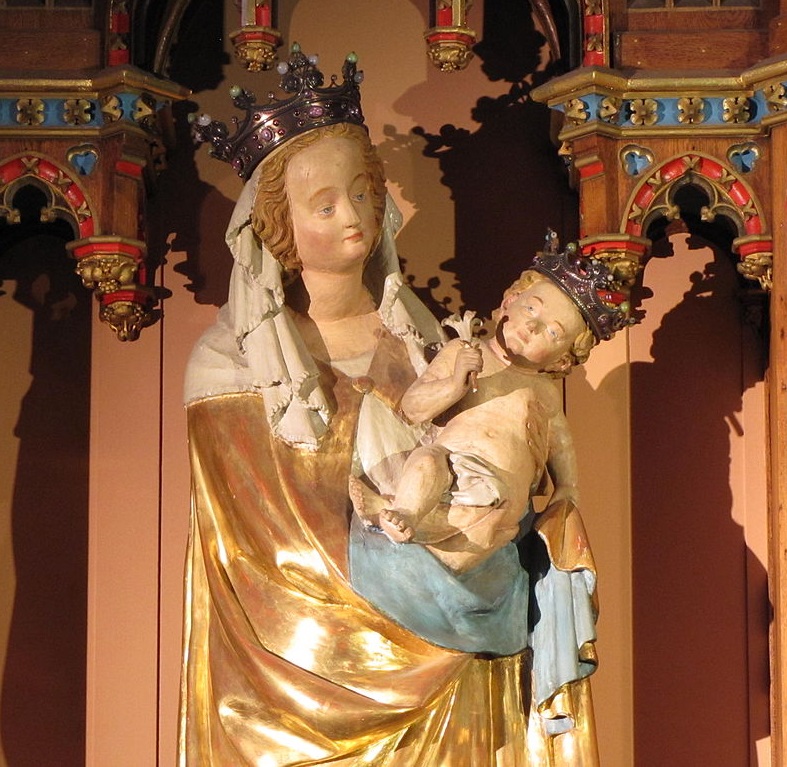 
Marienthal is located perhaps an hour from the city of Hagenau, and is one of the many famous places of pilgrimage in the Alsace region of France. Our Lady of Marienthal has been visited by pilgrims for many centuries, and an old chronicle tells of wonderful miracles that were granted on behalf of many of the believers who visited the ancient church. The benevolent Virgin Mary obtained grace there for all of the afflicted, and when sinners called upon her for assistance they would inevitably find comfort and mercy. There was no pain which was not relieved, no accident that was not mended, not a hope that was disappointed. The crippled and lame could pray there in that time and return home healed, leaving their crutches behind in the church. The blind were illuminated and regained their sight, and the deaf heard again. Mothers obtained the health of their children; young people who had lost their peace of mind through sin found forgiveness and regained their peace of mind; sailors in the dangers of the sea and the soldiers in the bloody battle called upon the assistance of the loving mother of Marienthal, and never in vain.

The church remained open day and night so that the pilgrims at any hour could have access to grace through Our Lady of Marienthal, but this practice also provided an opportunity for robbery attempts. Mary protected her home, and left no thief of church property free to run. As an example, it happened once that a thief was alone in the church shortly before daybreak, and beholding a beautiful jewel upon the altar that had been left as a gift, stretched forth his hand to steal it. As he did so, a supernatural force held him in place until the monks from the monastery, which stood near the church, came and found him later in the morning. He was promptly delivered to the courts in Hagenau for punishment.

Our Lady of Marienthal

When the heresy of Martin Luther penetrated the Alsace, anything that was sacred to Catholics was ridiculed and persecuted as a consequence. Pilgrims were set upon, and Marienthal was threatened with destruction. In many places the altars of Catholic churches were already smashed, and the images of the saints cast down; the same fate seemed about to befall the church at Marienthal.

The devout Catholics decided to hide two miraculous paintings, as well as the statue of the Sorrowful Mother with the child Jesus in her arms, from the predatory hands of the new iconoclasts. They were taken in secret to the monastery for safekeeping. A concurrent document states that the statue of the Sorrowful Virgin shed copious tears while on the way, which was seen by all those present. The statue and paintings were returned to the church once the initial threat had passed, but the pilgrims to Marienthal were much less numerous, as they were often derided by the Protestants, and mistreated as godless blasphemers.

A new persecution broke out in 1569 as enemy soldiers roamed the Alsace and devastated it. Marienthal was also exposed to their devastations to a great extent. At that time a woman named Hochstatter wanted to prevent the desecration of the Holy images, and decided once again to transport them to Hagenau.

“With this intent,” tells the Chronicle, “she came into the church of the Blessed Virgin, ascended a ladder and took the statue of the Sorrowful Virgin on her shoulders and went on her way.” She had acted out of zeal, but the statue of the Mother of God was far too heavy, and her knees staggered as she inevitably sank to the ground beneath her burden. Following a momentary inspiration, the woman knelt next to the image and pleaded with a trusting heart to Mary:

“O, my Heavenly Mother! Please ask thy Divine Son to increase my strength, or else decrease the severity of this precious load so that I may take it to safety.” After finishing her prayer, the woman took up the image again on her shoulder and easily carried it the rest of the way to Hagenau.

From this time on the church at Marienthal was closed and abandoned. Soon, it was no longer possible even to kneel down next to the degraded walls, as the heretics who roved around in the neighboring woods mistreated all the Catholics that they could get their hands on. These conditions continued until the end of the sixteenth century when the Jesuits came and awakened the old beliefs and reopened the church at Marienthal. Not only did they return the church to its former glory, but they exterminated the heresy in considerable parts of the Alsace.

But a new storm broke out because of the French Revolution. Two priests and some pious women, working together at the risk of their lives, took the wonderful images from the church, as well as the consecrated vessels and other ornaments of the church, to Ottersweier, a village on the right bank of the Rhine. They remained there until the restoration of Catholic worship. Meanwhile, Marienthal was occupied by German troops who had invaded Alsace. The soldiers used the church as a barracks.

The sacred images were finally restored in 1803 via a triumphal procession from Ottersweier to Marientha. The clergy were followed by the entire population of Hagenau who were flying colorful flags and burning candles in the solemn procession. The Bishop of Strasbourg celebrated a Pontifical High Mass, inaugurating a day of celebration that is still continued annually on the first Sunday of June.

Since that time, Marienthal is once again visited as frequently as ever, especially on the feast days of Our Lady. The pious crowd rushes to the enlarged and embellished church, whose choir walls are entirely covered with votive offerings. Most young Alsatian and Lorraine soldiers go to the church at Marienthal before they begin their service to implore the protection of the Blessed Virgin. Even today you can see the parents of those who miraculously escaped death in battles and engagements kneeling before the altar to thank God and to read their thanks aloud. Even many Protestants, sensible to the example of the faithful and the reports of miracles that are worked at the site, send their names in secret in the hands of pious persons to Marienthal, asking them to pray and offer gifts for them.

Return to Marian Calendar June from Our Lady of Marienthal

Return to Titles of Mary from Our Lady of Marienthal