Our Lady of Louvain 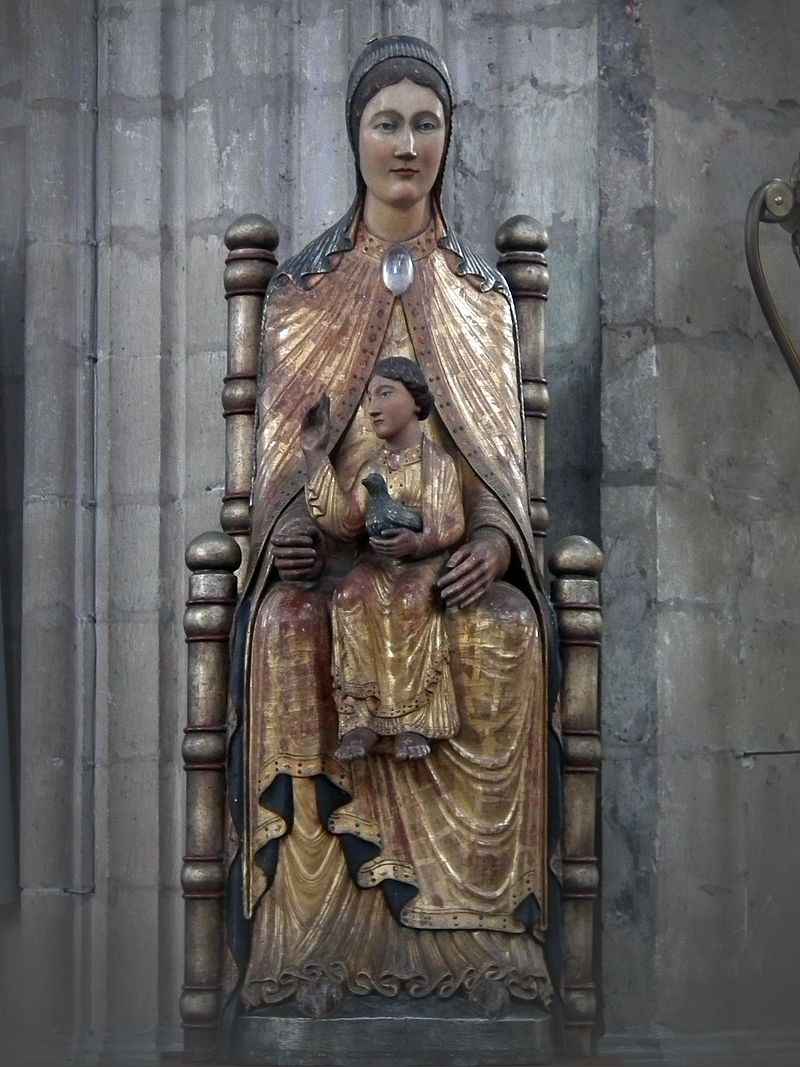 The Abbot Orsini wrote: “This Virgin, in high veneration in that country, began to work miracles in the year 1444.”

Saint Peter’s Church, or Sint-Pieterskerk, is the oldest church in Leuven, Belgium, having been founded in about 986. The first church burned to the ground, but the present Gothic style church was begun in 1425. The church suffered severe damage during both world wars, as in 1914 the roof and nave were burned down, and in 1944 the north aisle suffered bomb damage.

The church of Saint Peter is the home of Our Lady of Louvain, or the Virgin of Louvain, a statue of the Blessed Virgin and her Divine Son also called the Sedes Sapientiae, or Seat of Wisdom. The Virgin of Louvain was a wood statue of the Blessed Virgin Mary carved by Nicolaas De Bruyne in 1442. It is a larger facsimile of an earlier statue dating from the 13th century. That statue was completely destroyed during the Second World War, and not by the Fascists or Nazis, but instead by allied bombs. It is a replica of Bruyne’s famous statue that is currently on display in the church.

Our Lady of Louvain

Sedes Sapientiae is a specific title for the statue of Our Lady of Louvain, but it is also a type of Christian iconography of the Blessed Mother which depicts the Blessed Virgin seated upon a throne with the Christ Child in her lap. This type of representation of the Blessed Mother became especially popular early in the 13th century, and the throne she sits upon usually has some depiction of lions and the Blessed Virgin’s feet are usually shown resting upon a stool, and for good reason.

The “Seat of Wisdom” is a title of Mary that many Catholics will recognize from the Litany of Loreto. It was no less a luminary than Saint Peter Damian, who in the 11th century said of the Blessed Virgin Mary that she “is herself that wondrous throne referred to in the Book of Kings.” In this he was alluding to Solomon’s throne, the throne of the king renowned throughout history for his wisdom. His throne was of ivory overlaid with the finest gold. “It had six steps; and the top of the throne was round behind: and there were two hands on either side holding the seat: and two lions stood, one at each hand. And twelve little lions stood upon the six steps on the one side and on the other: there was no such work made in any kingdom.” (Third Book of Kings, Chapter 10: 18-20)

She is descended from the noble lineage of David. As the Mother of God, the “Seat of Wisdom,” the vessel of the Incarnation, who carried and gave birth to the second person of the Blessed Trinity, she herself is in a certain sense the throne upon which the Son of God reigns.