Our Lady of Liesse 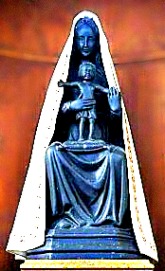 December 2: Our Lady of Liesse


The pilgrimage to Our Lady of Liesse, in Picardy, not so old as those of the south of France, as it does not go farther back than the twelfth century, surpasses them in celebrity. The origin of the statue of the Blessed Virgin, which adorns this holy place, is very marvelous; the tradition has been preserved, not only in the province of France where it is found, but also in the Holy Land. We are even assured that it exists in the archives of the Knights of Malta. Here is the tradition, which bears a very decided oriental stamp.

Foulques of Anjou, King of Jerusalem, having rebuilt the fortress of Bersabee, four leagues from Ascalon, to protect the frontier of his kingdom against the incursions of the Saracens, confided the care of it to the brave and pious knights of Saint John of Jerusalem. This valiant garrison was often engaged against the infidels who held the ancient country of the Philistines for the Sultan of Egypt.

One day the knights of Saint John, among whom were three brothers of the ancient and opulent house of Eppes, in Picardy, fell into an ambush, and in spite of prodigies of valor, were taken and laden with chains by the Muslims, who sent them into Egypt. The gentlemen of Eppes had the lofty mien, the tall stature, and the heroic bearing of the ancient nobles of the north of France.

The sultan at once singled them out, and, desirous of gaining them over to his false prophet, began by throwing them into a dungeon to weaken their courage. He held before their eyes afterwards the most enticing prospects, in order to draw them into apostasy.

The three warriors, who had been inaccessible to fear, were deaf to the noise of gold and the voice of ambition. The sultan, deceived in his expectations, sent to them the most celebrated imams, to argue with them upon faith. The good knights, through disgust of Islam, became all at once subtle theologians, and defended Christianity as well in dispute as they had often done with the shield on their arm and the lance in their grasp.

The sultan considered himself bound in honor to vanquish the captives, and his opposition increased with their resistance. He swore that the Knights of Saint John should follow the standard of the prophet, even if it should cost him the half of Egypt. He had a daughter handsome, chaste, accomplished, and every way worthy to follow a better faith; he sent her to the dungeon where the French knights were languishing in fetters, and charged her to set before them a frightful picture of the punishments prepared for them.

The knights received the princess with those testimonies of respect which were at that time lavished upon ladies; but they repelled her insinuations with the resolute courage of men who accept of martyrdom, and explained to her their belief in a manner so persuasive that the Muslim lady betook herself to serious reflection on Christ and His Blessed Mother.

A miraculous and resplendent image of Mary, Our Lady of Liesse, which, it is said, was brought by angels to the pious champions of the Christian faith, completed the conversion of the young infidel. One night, when she had gained over the guards of the three French warriors by bribes of gold, she made her way into their prison with a casket full of precious stones, and made her escape with them from her father’s palace.

After passing the Nile in a boat prepared for their reception, the fugitives directed their course towards Alexandria, hoping, perhaps, to conceal themselves for a time in the Coptic monasteries of the desert of Saint Macarius. But, after marching for some hours, the princess, exhausted with fatigue, wished to rest for a little while, and, in spite of the imminent danger, the three knights of Saint John, determined to keep good guard, made her sit down in a field of doura in full verdure, and seated themselves at a respectful distance. The princess fell asleep, and her travelling companions, after struggling in vain against the drowsiness which followed long nights without rest, slept soundly also.

No one knows how long their slumber continued. The knight of Eppes, the eldest of the three, was the first who awoke; the sun was beginning to gild the tops of the trees, where he heard the sweet singing of birds. The crusader looked at the landscape with great surprise: he had gone to sleep in sight of the Nile and the pyramids, under the fan-like branches of a palm-tree, and he awoke beneath an oak, with knotty branches, on the margin of a clear spring, on the freshest turf, sprinkled with white daisies.

A short distance off, the round and dark towers of an old baronial castle reminded him of the manor where he had left his mother, all in tears at his departure for the Holy Land. A shepherd, who was driving his sheep to the fields, relieved him of his perplexity; the castle which he beheld was in fact his own castle of Marchais, and he awoke in Picardy, beneath the avenue which his fathers had planted. He blessed the Holy Virgin, and awakened his companions, whose astonishment was as great as his own.

They had preserved the image of the oriental Madonna; they built a handsome church to receive Our Lady of Liesse, and the Muslim princess received baptism in the cathedral of Leon.

We may innocently believe that this little statue of Mary came into France by more natural means; but what it is impossible to doubt is, that it was brought from the Holy Land by three great men of Eppes, knights of Saint John of Jerusalem.

The most illustrious names of the monarchy figure in the list of pilgrims to Our Lady of Liesse. We read there those of the Duke of Burgundy, Louis II of Bourbon, Prince of Conde, Duke of Mercoeur, of Prince Albert Hermy of Ligne, of Madam Henrietta Frances of France, Queen of England, of the princes of Longueville, of Marshal D’Ancre, of Mademoiselle de Guise, of the Count D’Egmont, of Louis, Duke of Orleans, brother of Charles VI, of Charles VII, of King Rene, Of Louis XI, of Francis I, of Henry II, of Charles IX, of Queen Mary of Medicis, of Louis XIII, of Ann of Austria, of Louis XIV.

Several of these great personages, not satisfied with leaving rich presents to Our Lady of Liesse, placed their statues there: that of Louis II of Bourbon, Prince of Conde, was of gold. Mary D’Arquin, then grand Marshal of Poland, and who was afterwards queen of that kingdom, came to the chapel of Our Lady in 1671; she offered to the Blessed Virgin a child in silver, representing the Prince Alexander Sobieski, her son, with a golden chain enriched with diamonds, to testify that she devoted him to the Mother of God, as her slave.

This sanctuary was pillaged like the others by the Protestants; the Revolution came to glean whatever was left.

The chapel of Our Lady of Liesse still attracts, at the present day, a great concourse of pilgrims.

Return to Marian Calendar December from Our Lady of Liesse

Return to Titles of Mary Page from Our Lady of Liesse