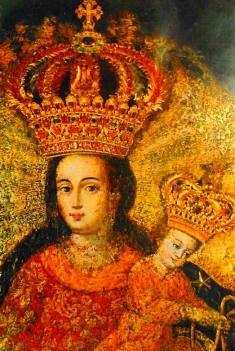 Our Lady of Las Lajas

Our Lady of Las Lajas


There are many amazing incidents involving apparitions of the Blessed Virgin Mary related throughout history, and nearly countless times where she has come to give her special assistance to men. One of the most astonishing events involves a little known apparition, Our Lady of Las Lajas, and a miracle that can still be witnessed today on a cliff face of Guaitara Canyon in Colombia, South America.

It was in the year 1754 when a woman named Maria Mueses de Quinones was traveling from her home in the village of Potosi to the neighboring village of Ipiales, which was about 6 miles away. The trail had turned down into the gorge formed by the Guaitara River when Maria was caught in a sudden squall. She did not like this shadowy and overgrown place, for she, like all the natives, believed the grotto known as Las Lajas (The Rocks) was inhabited by the devil. Despite her fears, Maria was soon forced by the violence of the storm to take refuge there anyway.

Making the Sign of the Cross and invoking the aid of the Blessed Virgin, Maria peered fearfully into the darkness as she took her first few halting steps into the cave. Surrounded by the awful darkness she was just beginning to look about when she felt someone, or something, moving directly behind her. Afraid to turn around, she ignored the feeling until she felt a finger begin tapping her insistently on the shoulder. Certain it was the devil himself, Maria fled out into the raging storm.

Maria had a young daughter named Rosa, a child who had been a deaf-mute since birth. Sometime later, returning home from Ipiales, Maria was carrying Rosa on her back on the way to their village when she suddenly was suddenly overcome by exhaustion. Unable to go any further, she sat down and rested on a large stone near the dreadful grotto.

“Mommy, look at the mestiza who has detached herself from the rock with a little boy in her arms and two little mestizos at her side!”

With a stifled cry Maria sprang to her feet, for it was her little Rosa who had spoken. Now the child was beginning to crawl happily up the tumbled stones toward the entrance to the grotto. Maria caught up her daughters’ hand and lifted the child from the rubble before turning to flee without once looking back.

Maria’s friends, and all the other inhabitants of her village, knew that Rosa had been mute since birth, though now she was merrily chattering along like any other child her age. There were many questions, none of which Maria was able to answer, for she did not understand what had happened herself.

Even though Maria was still suspicious of the grotto, she would bring her daughter Rosa back from time to time to leave flowers or candles in thanksgiving.

One day, after life had seemingly returned to normal, it was noticed that Rosa had disappeared. Maria searched for her daughter everywhere, but could not find the little girl. Then it occurred to her how excited Rosa would become when visiting the grotto, and having failed to find her anywhere else, she hurried there at once.

Maria was not wrong. What she saw at the grotto caused her to fall to her knees upon her arrival, for she beheld her own daughter Rosa playing with an extraordinarily handsome boy of her own age, and watching over them both was a magnificent queen. Maria knew at once it was the Christ child and Mary, His purest Mother.

Perhaps Maria felt unworthy of what she had seen, or was unwilling to answer the many questions that would surely be asked, for she did not speak what she had seen to anyone. Her joy over what she had seen was short lived, however, as little Rosa soon became sick, and in a short while died of her sudden malady.

Overwhelmed with grief, Maria returned to the grotto carrying in her arms the lifeless body of her little Rosa. It was there that her child had once received her voice and her hearing. Perhaps there would be another miracle, and she would regain her life. Maria prayed with confidence for her daughter’s life, reminding the Blessed Virgin of how devoted Rosa was to her, bringing flowers and candles to the grotto in her honor since she had been cured. It was not long before Maria received that for which she begged, as Rosa drew breath and opened her eyes to look up at her mother. It was as if she had only been asleep.

Word of this new miracle spread quickly, and many of the local people joined the next day in a procession with their priests in order to give thanks at the site of the apparition. When they arrived at the grotto they were all stunned to witness a brilliant portrait none had ever seen or heard of before. 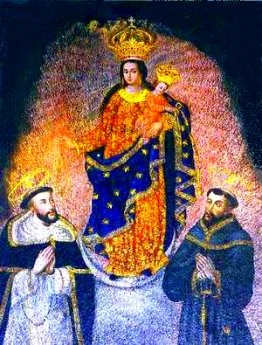 Imprinted on the face of the cliff was an image of the Blessed Virgin holding her infant Son in her arms. Both are smiling sweetly. The Virgin’s hair is long and dark brown, extending to about the elbow. Her eyes are large and innocent, and her garments beautiful to behold. On one side of them is an image of Saint Dominic and on the other is Saint Francis of Assisi. Mary is extending her hand toward Saint Dominic, holding a Rosary. The Holy Infant holds a Franciscan cord which he appears to be giving to Saint Francis. The spiritual sons of these two holy saints were responsible for the conversion of the people of Central and South America.

There was a priest, Father John de Santa Gertrudis, who desired to build a church to honor the Blessed Virgin at the site of the miraculous image. The fact that he lost the use of his sight did not deter him from the task, as he walked back and forth the length and breadth of the region begging for the money he would need to build the chapel. It was not until 1764 when he had collected the money he needed, and construction began. On the glorious day when the church was completed, the Blessed Virgin showed her appreciation to her faithful son. As the priest knelt before her image that he so loved in thanksgiving, it suddenly became visible to him, and Father John de Santa Gertrudis realized that his sight had been restored. 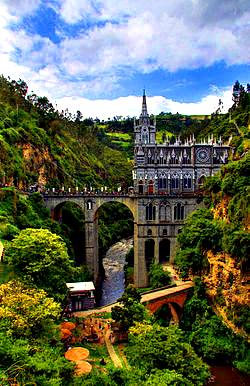 This image, known as Our Lady of Las Lajas, is clearly of miraculous origin. The colors have not lost any of their brilliance over the centuries, and they are not a paint or coloring that has been applied to the surface of the stone. Geological samples collected have proven that the color actually permeates the rock, for, as impossible as it may sound, the colors of the image are perfectly evenly distributed and reach several feet into the face of the cliff. Scientists cannot explain it, while those who hate God deny the obvious and attempt to distort the truth of its miraculous origin.

A Gothic style church has since been built to house the wondrous image, and in 1952 Pope Pius XII granted a canonical crowning of Our Lady of Las Lajas and her Divine Son.

Return to Titles of Mary from Our Lady of Las Lajas