Our Lady of Laon 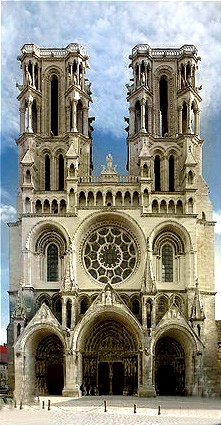 The Abbot Orsini wrote: “The shrine or chapel of Our Lady of Laon was erected into a cathedral and founded by Saint Remigius, Archbishop of Rheims, about the year 500, where he consecrated as his first bishop Saint Geneband, his nephew. Miracles were wrought there, and, among others we read that in the year 1395, there was seen on the steeple the picture of a crucifix, the wounds of which bled.”

The present cathedral located in Laon, Picardy, France, the Laon Cathedral, or Notre-Dame de Laon, was begun in about 1155 and completed in 1235. It was built on the foundation of an earlier cathedral that was consecrated in the year 800, but burned to the ground in the year 1111 during an uprising, and was therefore not the same cathedral founded by Saint Remigius.

The people of Laon took pride in their cathedral and tried to make it rival the great shrine of Chartres. They did not succeed, but the result is the sum of an emotion, clear and strong as love and much stronger than logic and clearer; the charm of the Laon cathedral lies in its unstable balance; which without doubt Our Lady accepted in love as it was meant by her devoted children. It was one of the first cathedrals constructed in the new Gothic style.

One other unusual aspect of the cathedral is that there are sixteen carved bullocks carved in stone like gargoyles. There is a tradition that once when some of the stone was being hauled up the slope for use in the construction of the church, at one point the animals hauling the wagon could go no further under the strain of the load. A huge ox appeared at that moment and assisted them in moving the load up into position, but then disappeared as quickly as it had appeared.

Much of the stained-glass is original, and as at Notre Dame Cathedral in Paris, there is a beautiful rose window dating from the 13th century. It depicts the Blessed Virgin seated on a throne with her Divine Child between Saint John the Baptist and the prophet Isaiah. The interior of the cathedral was finished with white stone, it is considerably brighter than Notre Dame cathedral in Paris.