Our Lady of Lac Bouchet 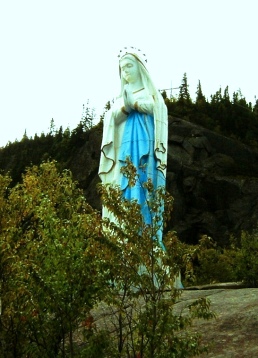 The Saguenay Fjord is an ancient glacial valley that has been overrun with sea water. In the year 1828 a surveyor, Joseph Bouchette, ventured into the region for the purpose of collecting data for topographical maps. It was during this expedition that he found a suitable site for a future village, which Pascal Dumais and his family later settled. This marked the founding of the village of Lac-Bouchette, with more and more people coming to settle in the area until the village had 300 inhabitants in about the year 1888.

Our story actually begins with a man named Charles Napoleon Robitaille, a salesman who traveled the roads in and around Quebec. During the winters he would have to cross frozen rivers, and it was in the winter of 1878 while trying to cross the Saguenay River that the ice broke under the weight of his horse and sleigh. Pulled beneath the surface of the icy waters, Charles was alone and completely helpless. Knowing he was dying, he implored the Blessed Virgin Mary to save him.

Charles miraculously survived, and managed to escape from the river with his life. He knew the Virgin had assisted him, and so to honor Mary and her recent apparition at Lourdes, he asked Louis Jobin to create a huge statue of the Blessed Virgin sculpted in the image of Our Lady of Lourdes. He envisioned the statue in the heights overlooking the mouth of the river. The statue Jobin sculpted became known as Notre-Dame du Saguenay.

Our Lady of Lac Bouchet

The finished statue is an impressive 35 feet high, and weighs 3 tons. Sculpted of solid white pine, it was then sheathed in lead to protect the statue from the harsh weather. Hauling such a huge statue into place was a difficult task in the late nineteenth century. After being constructed, it was broken down into 14 separate pieces and then hoisted into place to be put together again. On the right side of the base of the statue, the sculptor affixed a lead plate on which is written: "Louis Jobin, Quebec." The statue made him the most famous sculptor of the time, and the statue has become a regional landmark, with visitors from the world over assembling at her feet to sing the Ave Maria.

In 1889 the mission church of Saint Thomas Aquinas was built, and the next year Father Joseph Ironwood became the first pastor. A second church was soon built, in 1898, as the population increased dramatically. Now, on the north shore of Lake Bouchet, in the province of Quebec, there stand the buildings of a friary and the sanctuary of Our Lady of the Sagueney.

In 1920, Father Elzear Delamarre built a house and a private chapel dedicated to Saint Anthony of Padua on the site, which later became known as the hermitage of Saint Anthony and is one of the national shrines in Quebec. So began the pilgrimage-shrine that has since grown steadily in popularity.

After Father de Lamarre’s death in 1925, the Capuchin Franciscans took over the property, built their house and church there, and ministered to the thousands of pilgrims who sought out the sanctuary.

Our Lady of Lac Bouchet.

Return to Marian Calendar July from Our Lady of Lac Bouchet

Return to Titles of Mary from Our Lady of Lac Bouchet