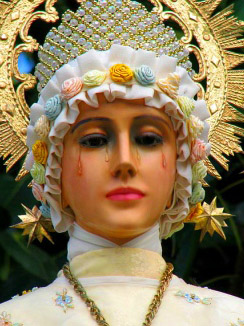 On September 19, Our Blessed Mother appeared in south-eastern France to two children, Maximin Giraud and Melanie Mathieu, who were taking care of a few cows on the slope of a mountain which rises above the village of La Salette. Their attention was drawn to a globe of light a short distance away. While they gazed, the globe opened and they saw a woman seated on some stones which surrounded the bed of a dried stream. Her elbows rested on her knees, her face was buried in her hands, and she wept.

The children were frightened and did not know what to do, when the Lady arose and in the sweetest of tones, said:

“Come near, my children; do not be afraid. I am here to tell you great news.”

The children obeyed and when they were close, they saw that the woman’s countenance was of rare beauty, though her eyes were filled with tears. They saw that her shoes were sparkling white, the buckles on them were square and golden. Encircling the soles were tiny roses which did not crush as she stood on the tips of the blades of grass. Her apron was golden and it reached to the bottom of her full white dress. Her arms folded before her were concealed within broad straight sleeves which reached beyond her fingertips. Along the border of her plain white kerchief crossed on her breast, ran many-colored roses both large and small, and besides these was a flat, thin gold chain about an inch in breadth.

The face of Our Lady of La Salette was so resplendent with light that the noon-day sun lost its brightness for the children; her complexion was a pale white such as those who have been bowed down with suffering. Her beauty was radiant, so dazzling, so scintillating, that Melanie was frequently rubbing her eyes, thinking that by so doing she might see the better, while Maximin could see her face but vaguely. Her headdress was white and above it, a royal diadem wreathed with roses of many hues glittered, while on her bosom rested a golden crucifix, with the pincers and hammer of the Passion. Her majestic beauty was ravishing; her face exceedingly beautiful – yet profoundly sad. It was not earthly.

Mary, Our Lady of La Salette, stood with her head bent toward the children. Her mien and her manner were reassuring and kind, but also sorrowful. They listened to her voice; a voice far sweeter than the sweetest melody:

“If my people do not submit, I shall be forced to let go the hand of my Son. It is so strong, so heavy, that I can no longer withhold it. How long a time do I suffer for you! If I would not have my Son abandon you, I am compelled to pray to Him without ceasing. And as to you, you take no heed of it. However much you pray, however much you do, you shall never recompense the pains I have taken for you.”

Then Our Lady of La Salette told them that the two things which at that time pained her Son most were the neglect of Sunday observance and blasphemous language. She foretold a great famine, and asked the children to make known her message. She walked off a bit, lifted her gaze toward heaven and vanished. Next day a miraculous spring was present where Mary had stood.

Return to Marian Calendar September from Our Lady of La Salette

Return to Titles of Mary from Our Lady of La Salette