Our Lady of Kieff 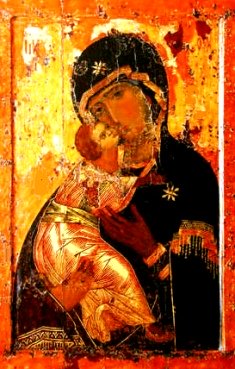 
Kieff on the banks of the Dneiper River was the first resting place of this famous image of Mary. Here, according to legend, the Apostle Saint Andrew had once stopped on his way from Constantinople to Rome. Waking in the morning to the sights of the heights of Kieff, he was moved to prophecy:

“See those hills? On those hills shall shine hereafter the grace of God.”

However, it was nearly 1,000 years, 1010, to be exact, before the Russian Prince Vladimir was baptized at Kieff with all his people, and the teachings of the Gospel began to go out from the heights that had so impressed the Apostle.

Our Lady of Kieff

The prince sent to Kherson for a picture of Our Lady which was, according to legend, painted by Constantine, and according to another, commissioned by him, which seems more likely. The Prince endowed the monastery in Petchersk to house the famous picture and here it remained until the fifteenth century.

In 1467 Ivan III, Grand Duke of Moscow, built the Church of the Assumption in the Kremlin as a memorial of his marriage. As a crowning jewel of his new church, he asked for the famous picture of Kieff. This aged city was both grieved and frightened at the demand. The people rose in protest; they did not want to lose their dearest treasure. Then the Blessed Virgin appeared in sleep to the prince and told him to give up the picture, because she would personally see that it was replaced. He gave it to the agents of the Duke of Moscow on the following morning and returned to his church to find that another picture exactly like it had mysteriously appeared in the place of the one he had returned.

Kieff and Moscow were still disputing vigorously up to fifty years ago, the 400-year old customary disagreement over which city had the original picture of Our Lady of Kieff, and which had the one placed there by the Blessed Mother. There are thousands of copies now spread all over the world.

Return to Marian Calendar April from Our Lady of Kieff

Return to Titles of Mary from Our Lady of Kieff