Our Lady of Ireland 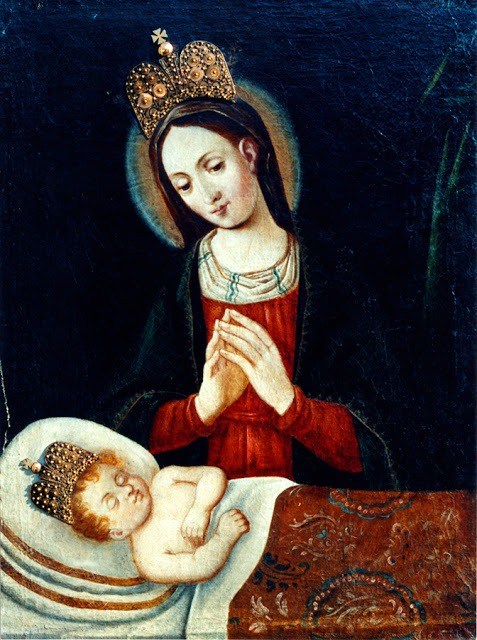 March 17: Our Lady of Ireland

During the difficult times of Oliver Cromwell, one of the bishops forced to leave Ireland was Doctor Lynch, Bishop of Clonfert. He traveled about Europe and finally came to Hungary in 1654. He was kindly received by John Pusky, Bishop of Gyer, and eventually became auxiliary bishop of the Diocese.

Ten years later Bishop Lynch planned to return to his native land. Almighty God prevented this; during his dying hours he gave to the Bishop of Gyer his only material treasure – the picture of the Madonna of Ireland. Soon after, as a memory of the Irish Bishop, the picture of Our Lady was hung on the wall of the Cathedral at Gyer.

Years passed. On the feast of Saint Patrick, while large numbers of the faithful were present in the Cathedral, an awe-inspiring event took place. A bloody sweat was observed to come over the figure of the Blessed Lady in the picture. Drops of blood fell onto the Infant Jesus; as the bleeding continued for three hours. Linen towels, which are still retained under glass at her shrine, were used to wipe the blood from the blood-perspiring face.

In the archives of the Cathedral of Gyer, there is a document written in 1697 on parchment, relating this event. It is signed not only by the clergy and the laity who were present at the Mass, but by the mayor and the councilmen, by the governor, Lutheran and Calvanist preachers, a Rabbi – over one hundred signatures represent eye-witnesses to the miracle. In 1874, Pope Pius IX granted a plenary indulgence on the feasts of Saint Patrick and the Assumption, before which feast public novenas are held.

Our Lady of Ireland

In 1913 Archbishop Schrembs of Toledo, visited Gyer in Hungary. He saw the beautiful painting and was deeply moved when told of the wonderful event. He requested a copy for the many Irish Catholics in his diocese who would be happy to learn the history and to possess the picture of Our Lady of Ireland. The copy was placed face to face with the original and then given to Bishop Schrembs. On August 23, 1914, Archbishop Schrembs dedicated the new St Stephen’s Church in Toledo, Ohio. The Hungarian people had paid about 2/3 of the expenses of the building. The Bishop presented the Madonna to this church, saying:

“I am convinced that the picture will be treasured in a Hungarian Church just as much as it would be in an Irish one.”

Both Hungarians and Irish were thrilled.

The image depicts Mary crowned as queen, Our Lady of Ireland, and before her, lying on several circular pillows, is the Infant, also crowned as the Little King, and covered with royal robes.

Return to Marian Calendar March from Our Lady of Ireland

Return to Titles of Mary from Our Lady of Ireland