Our Lady of Highest Grace 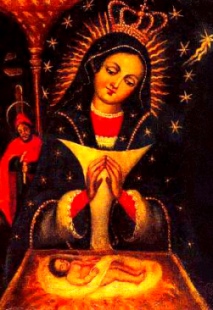 April 2: Our Lady of Highest Grace


Before the Spaniards began their conquest of America, pilgrimages were already being made to the shrine of Our Lady of the Highest Grace in the town of Higuey in the Dominican Republic.

Ponce de Leon relates that he and his crew were saved from shipwreck through their prayers to this Virgin. Mary’s miracles have continued down to the present; a multimillion dollar ultra-modern Basilica erected at Higuey in Mary’s honor, where the image is still displayed, gives testimony of this.

Ponce de Leon’s daughter, La Nina, also had a great devotion to the Mother of God. Our Lady appeared to Nina while she prayed before the statue in their home chapel, and told her to request from her father a gift, a painting of Our Lady of Highest Grace.

Ponce de Leon was struck with amazement at the request, for he had never heard of Our Lady under that title.

He asked Nina, “How could I identify this image?”

“By the white scapular over her robe,” Nina replied.

One day while returning from a three-day trip, he asked for lodging at a small hut; his host granted this at the same time to an old man with a long white beard; the latter crouched against the walls, carefully guarding an apparent treasure in his saddle-bags.

Our Lady of Highest Grace

Ponce de Leon, forgetting the old man, told his host of his daughter’s wish, and added that the Bishop of Domingo had told him no such painting existed.

The old man hearing this, exclaimed, “The Virgin of Highest Grace does not exist? I have brought the painting with me.”

He then took from his saddle-bags a parchment, unrolled it and displayed a beautiful painting of Our Lady in simple tones of blue, white and red. Mary was depicted adoring the Christ child, while Saint Joseph holding a lighted taper hovered in the distance. Over the Virgin’s starred blue robe hung a white scapular. Ponce de Leon offered all he possessed in exchange for the painting, but the stranger waved aside the offer, saying, “Take it to La Nina.”

The two men fell on their knees to give homage to the holy image. When they again looked up, the old bearded stranger had vanished. When Ponce de Leon arrived home, his daughter awaited him under an orange tree in the plaza, stretching out her hands she begged:

“The painting, Papacito! Please, let me see it!”

When it had been unwrapped, La Nina fell on her knees, covering Our Lady’s face with kisses. Then she cried:

“This is exactly how our Mother of Highest Graces appeared to me!”

The painting of Our Lady of Highest Grace was placed in the chapel where the townspeople came to venerate it. Not long afterward La Nina died and was buried beneath the orange tree, which she loved, for it was there she had received the image.

Later the painting of Our Lady of Highest Grace disappeared from the chapel and was found in the branches of the orange tree. After this had happened three times, the people were convinced that Our Lady wished a shrine erected on the spot. Countless miracles began to occur there.

Return to Marian Calendar April from Our Lady of Highest Grace

Return to Titles of Mary from Our Lady of Highest Grace