Our Lady of Guam 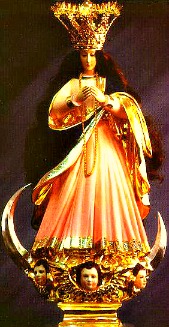 Our Lady of Guam, the miraculous statue to which the natives have such deep devotion, is three feet high, all ivory from the delicate classical face of Our Lady to the hem of her exquisite gown. She has a head of brown hair, adorned with a beautiful crown, and golden rings hang from her tiny ears. According to the Jesuit history of the island, Our Lady’s coming was miraculous.

A Spanish soldier, in the year 1825, was fishing a distance from the shore between the village of Mirizo and Umatac when he saw a strange object floating upon the waves. He moved closer and saw that it was a statue, supported by giant golden crabs, holding lighted candles in their claws. The soldiers claiming the statue as their own, installed it as Patroness in their barracks. They made a shrine for her, a wall recess with doors like a cupboard or camarino, from which Our Lady of the Cupboard takes her name. She is called Santa Maria de Camarino.

Our Lady of Guam

She made her home many years in the barracks, but the atmosphere did not always please her. She would be found missing, only to return with the edge of her mantle full of burs. When the soldiers were drunk with coconut brew, she would slam the doors of her cupboard shut against them.

No one remembers how she came to leave the barracks for the cathedral of Agana, but on the fourteenth of April a great earthquake occurred, terrorizing the natives and destroying their homes. It is believed that on that day she deserted the uncouth soldiers and showed herself to be the Patroness of the people and of Guam in particular. Many miracles of protection are attributed to Our Lady of Guam on this day.

On the eve of this day the people place a lighted candle outside their tight-closed shutters; they do this in memory of their Fathers who made the promise to Santa Maria de Camarino. In 1825 and again in 1834, they vowed to celebrate yearly a special feast for her protection from Linao, the earthquake, and Pagyo, the typhoon. On its part the miraculous statue has seen to it that no devout life has since that time been lost. Earthquakes and typhoons have come and left destruction, yet they have never taken one life or harmed the children of Santa Maria de Camarino, Our Lady of Guam.

Such is the story of Our Lady of the Cupboard, the miraculous virgin of Guam; to the eyes of fact simply a beautiful statue, some three feet height, executed with all the refinement of eighteenth century art, yet to the eye of faith, she is power incarnate. She is all ivory, but where that ivory came from, or what artist fashioned those exquisite hands, she alone can tell, just as she is the only one who knows the truth of her coming to Guam.

Flags of various nations have flown over the royal coconut trees of Agana: admirals and governors have come and gone, and each in his proper time has departed. Spanish architecture has had its day, and the Seabee buildings mushroomed all over the island. Yet, Santa Maria de Camarino abides through all changes to cherish her strangely chosen people. She reigns affectionately in the hearts of the people, the natives, as their Queen and Patroness.

When American Marines and Soldiers during the latter part of July, 1944, captured the island of Guam, the native population was for the most part Catholic. The Faith was brought there, no doubt, by Spanish priests who accompanied Magellan when he sailed around the world. The natives are called Charmorros, offspring of Spanish and Micronesian ancestors, religions, most progressive, most cultured of the people of the Mariana Islands. The greatest majority of them are brown-skinned, pleasantly featured, shy, well mannered, scrupulously clean. They know the American way of life, since they have lived for more than fifty years under the benevolent guidance of the Stars and Stripes. And Mary, Our Lady of Guam, Our Lady of the Cupboard, loves them and protects them.

Return to Marian Calendar April from Our Lady of Guam

Return to Titles of Mary from Our Lady of Guam

Return to Roman Catholic Saints Home Page from Our Lady of Guam
[?]Subscribe To This Site