Our Lady of Fourviere 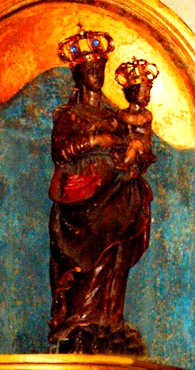 April 11: Our Lady of Fourviere


According to the traditions of Lyons, supported by a bull of Innocent IV., Saint Pothinus erected the first oratory where Mary was invoked in Gaul. It is asserted that he brought from the interior of Asia a small statue of the Blessed Virgin, which he deposited in a solitary and shaded crypt on the banks of the Saone, in front of the hill of Fourviere. He set up in this wild and secluded spot an altar to the true God, and placed there the image, which was transferred later on to a temple built on the hill itself, whence it took the name of Our Lady of Fourviere.

The veneration of the people, in the middle ages, surrounded this church, and it was a pilgrimage of great renown throughout the Lyonnais; but the Calvinists, who destroyed and pillaged so many rich sanctuaries, showed no favor to that of Lyons; the church of Fourviere, where, from the birth of Christianity, each generation had marked its passage by gifts to Our Lady of Fourviere, which would be at this day as precious to the antiquary, the sculptor, and the painter, as to the pilgrim, retained nothing but its four bare walls, which could not be melted down in the crucible, where so many master productions disappeared, which had the misfortune to be made of gold or silver.

Our Lady of Fourviere

The chapter of Saint John could not attend to the renovation of that of Fourviere, till long after the ravages of the Protestants. They worked at it after they had restored the cathedral and the cloister. The altar of Mary, Our Lady of Fourviere, was at last consecrated on the 21st of August, 1586. From that moment the confidence of the inhabitants turned towards that beacon of salvation. “The source of prodigies seemed dried up there,” says an ancient historian; “they began again at the end of the sixteenth century, and all Lyons felt great joy on the occasion.”

During the revolution of 1793, the church of Fourviere was sold; but when calm was restored, the zealous prelate who governed the ancient church of Pothinus and Irenaeus procured the sanctuary of Mary to be restored to the veneration of her as Our Lady of Fourviere. The inauguration of it was performed on the 19th of April, 1805, by the sovereign pontiff Pius VII. In 1832 and 1835, Lyons being threatened with cholera, lifted up her eyes to the holy mountain, and the Blessed Virgin said to the scourge, “Thou shalt go no farther.” The capital of the Lyonnese, respected against every attempt, changed its cries of alarm into canticles of joy, and the prayers of thanksgiving were solemnly and justly offered to Mary in her protecting sanctuary.

Ever since the happy period when that sanctuary was restored to religious worship, piety seems to have redoubled its ardor for Our Blessed Lady, and it is at Fourviere that it is sharpened and revived. The inhabitants of Lyons, and those of the county adjacent, throng the paths of the hill of Mary; at whatever hour you repair thither, you always find yourself in the midst of a crowd of pious persons of all ranks, ages, and conditions.

One day, in the year 1815, a pilgrim of an unusual kind, who had begun by observing Lyons from the summit of the hill, like a man who wanted to study both its strength and its weakness, presented himself in the church of Notre Dame; and the faithful, lifting up for a moment their eyes, which had been cast down in prayer, said to themselves, “Marshal Suchet!”

It was indeed he – the marshal of the empire, the child of Lyons, to whom was confided the defense of his native city – who passed along the nave of the church of Mary with a slow step, with a respectful countenance, in which was mingled something mild and softened, something like a distant remembrance of joy, which awakens and soothes the soul with an invisible music. He goes into the sacristy, and directs one of the chaplains to come to him there; the vice-president hastens to him: “Monsieur l’Abbe,” says the marshal, stepping forward towards the ecclesiastic, “when I was quite a child, my pious and good mother often brought me here, to the feet of Our Lady, and this I still remember…I will say more, this recollection is dear to me, and I have never lost it. Be pleased to have some masses said for my intention.” And putting down three Napoleons on the table where the offerings are registered, the brilliant hero of the gigantic epoch went to kneel, quite unpretendingly, before the altar of Mary, where he prayed for some time with edifying devotion. Moreover, Marshal Suchet terminated his noble and loyal career by a Christian end, for which he was praised upon his tomb.

Return to Marian Calendar April from Our Lady of Fourviere

Return to Titles of Mary from Our Lady of Fourviere