Our Lady of Deliverance 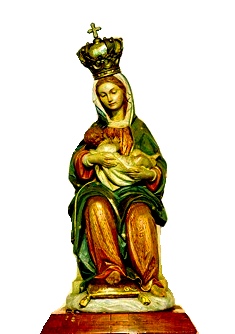 Devotion to Mary under the above title is one of the most ancient of all Marian devotions. It was the city of Madrid, in Spain, that became the scene of its popularization.

During the Spanish wars which occasioned the people to seek refuge in the New World, a looting soldier carried off a statue from one of the shrines in Madrid. The image was a beautiful little statue that depicted Mary cuddling at her breast the Infant Jesus whom she was lovingly nursing.

A poor peasant returning from the fields after making a visit to the shrine, recognized the statue in the possession of the drunken soldier. He bought the statue for a small sum of money, and carried it home to enshrine it in his humble cottage. It chanced that this man’s wife was nearing childbirth, so daily the couple knelt before the statue begging the Mother of God to give the expectant mother a safe delivery.

As the days passed, it was evident that there were difficulties, and that the wife of the poor peasant was certainly threatened with death. The father prayed most fervently before the image of Mary for his wife’s safety. His confidence was rewarded by a happy delivery vouchsafed by the Little Mother, as he lovingly referred to the statue. He named the statue accordingly, the Mother of Safe Delivery, which also became known as Our Lady of Deliverance.

Our Lady of Deliverance

The news spread rapidly, and Mary’s devotees, finding themselves under similar circumstances as the peasant’s wife, frequented the home until it became too small to accommodate all of them. A chapel was built for Our Lady of Deliverance, and later a church named after Saint Martin. The statue of the Mother of Safe Delivery was removed with great pomp; nobility and peasant alike knelt in prayer in their personal and family needs. Our Lady recognized all as her children, bestowing safe deliveries where requested.

This devotion also spread to the New World with the Spanish colonization of Florida. In the 1600’s the Conquistadors brought the image to Saint Augustine, known to them as Nuestra Senora de la Leche y Buen Parto, Our Lady of the Milk and Safe Delivery. It became the scene of one of the first known Marian Shrines in what was to become the United States of America.

Return to Marian Calendar July from Our Lady of Deliverance

Return to Titles of Mary from Our Lady of Deliverance