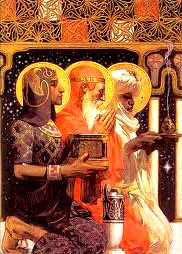 June 10: Our Lady of Cranganor


In the East Indies stands the church and the shrine of Our Lady of Cranganor, which it is asserted, was built by one of the three Kings who visited the Divine Child and His Blessed Mother. India was one of the countries that had the privilege of receiving the light of Faith at the dawn of Christianity.

History relates that Saint Thomas the Apostle came to India at Cranganor in 52 AD. There the Christians are still known as Saint Thomas Faithful. Kerala, as the place is also known, is cut off by the mountain ranges from the rest of India, and has held firmly to the Faith, regardless of the gloom of the rest of the continent. The deep spirituality of the Catholics evidences their great love for the Mother of God, Our Lady of Cranganor. Nala-bat as the country is likewise called, may be translated as Mary’s country, Mary’s namesake. It is believed that when Saint Thomas came to Cranganor, he brought with him a picture of Our Lady, painted by Saint Luke; this was lost after Saint Thomas’ martyrdom, but later discovered in a cave at Little Mount, Madras, near the scene of his death.

In 1498 when the Portuguese arrived in Cranganor, they were surprised to find so many churches dedicated to Mary. Saint Francis Xavier found the people of Cranganor very strong in faith and devoted to Mary, Our Lady of Cranganor; he spared no pains to flame their devotion to the Mother of God.

One may wonder why devotion to Mary took root and blossomed so strongly in Kerala – almost as though it met some deep religious and psychological need. Perhaps the reason for such spontaneous devotion is to be found in the position of the mother in the Hindu family. For while love, obedience, devotion and dependence on one’s mother are natural to all peoples and nations, in Cranganor the exalted position of the mother assumes singular, if not unique, proportions. The mother is everything in the family; to depend on her is a deep-rooted tendency of all children in Kerala. Much more than the father, the mother is the bread-winner in the family. She owns, buys, and sells property and governs the house without any consultation with the father; he may frequently be away, but she always remains at home in the house. Her brothers have no right to property, only a living allowance and accommodations. Now this matriarchal system has been carefully guarded by the majority of Hindus. It lies at the very heart of the traditional way of life in Kerala; a time-honored custom which has helped to give Marian devotion an easy welcome and speedy growth.

Saint Ignatius of Loyola always wore the rosary conspicuously over his cassock. To his great satisfaction, Our Lady’s “Madre de Dios” church was assigned to him on his arrival at Cochin, replacing Cranganor as the port of traffic with the western world. When Saint Francis arrived, he found a Confraternity of the Blessed Virgin Mary already established and he fostered this zealously during his lifetime.

Return to Marian Calendar June from Our Lady of Cranganor

Return to Titles of Mary from Our Lady of Cranganor