Our Lady of Copacabana 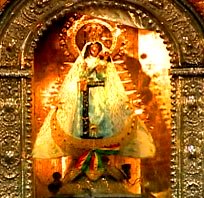 August 6: Our Lady of Copacabana


Among the passengers of a ship lost in a storm near Rio de Janeiro, were some Brazilian pilgrims returning from a visit to the shrine of the Virgin of Copacabana in Bolivia. They called upon the Virgin to intercede for them, and, they were landed safely on the Brazilian shores. In token of gratitude, they called the spot Copacabana – and it has since become one of the world’s favorite resorts.

In Bolivia, however, the original Copacabana does not suggest joyful social life; it spells a wonderful story of faith and love. Enclosed by beautiful sloping mountains overlooking the Mary-blue of Lake Titicaca, lies the tiny cove called Sepa-cabana or Copacabana. The name means “one who looks at the precious stone,” because in the distance, lovely to see, stretches the majestic, ice-capped necklace of the Cordillera of the Andes. In this spot in the days of the Inca Empire, lived good Indians whose sole duty was to prepare for journeys of worshippers to the Island of the Sun, some miles out on the lake. Copacabana, accordingly, became the center of much Incaion activity, for the Incas were fanatic in their visits to the island shrine.

The missionaries who came with the Spanish conquerors naturally planted the cross in all large Incan centers, and a church was built in Copacabana. It was dedicated to St Ann. However, The Mother of the Blessed Virgin seemed to frown on this honor, for the town soon fell into disrepute and the harvests were poor. Many of the Indians moved away until only a few souls remained. Those who stayed believed that if the town were dedicated to some other saint, the town might prosper; but the agreement on the identity of the new patron could never be reached. 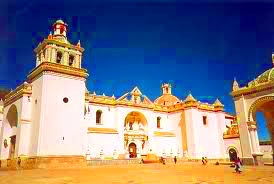 Our Lady of Copacabana

In the year 1581, a young Indian lad, Francisco Yupanbi, desired earnestly that his town be dedicated to Our Lady. In secret he started to construct a statue of the Virgin and Child to be presented to the village. For more than a year he labored day and night. When he called in the townspeople to see the result, they laughed at him in scorn, for Francisco knew nothing of art, and his statue proved it. Undaunted, but burning with the desire to complete the task, the youth went off to visit all the great cities of Bolivia in order to study under the masters who were decorating churches and monasteries.

Finally after months of disappointments and successes, he finished his labor of love, Our Lady of Copacabana – a Virgin with all of the features of his own race, in her arms an Infant no different than the thousands of Indian Babies Francisco had known so well. He called in his teachers and other artists, and they were astonished; he had created a veritable work of art; but for him it was a labor of love, representing his “Little Mother,” the Virgin who could save his native town of Copacabana. He hastened with his precious burden to his home; but as he arrived, he was met by a delegation of citizens, who had come to drive him and his silly lump of plaster away.

But the Virgin, Our Lady of Copacabana, smiled on Francisco; when the box was opened the hostile attitude changed; when they saw the love that had been caught in the face of the Madonna, they welcomed Francisco and his dear burden to the town. There were soon many miracles attributed to devotion to the new statue of Our Lady of Copacabana. The warmth of love engulfed Copacabana, and soon a church was built for the Mother and her Child. Jewels from devout persons far and near poured into the shrine to adorn Our Lady of Copacabana; distant pilgrims came day after day.

Francisco entered a monastery where he died a happy, holy man. Many legends grew up around his statue; it is said that if you look at her and think her beautiful, that is a sign that you are in her favor; if not, your soul is ugly. Many cures and miracles have been attributed to this Virgin, the greatest, that of faith – she stands as a monument of the faith of Francisco Yupanbi and to the faith of the millions of Indians who came after him; of poor and rich, mighty and lowly, who have revered this simple piece of clay that reminds them of their “Mamita,” the little Mother of everyone. The Blessed Virgin Mary is the patron saint of Bolivia, and the shrine of Our Lady of Copacabana is one of the oldest shrines in the Americas.

*much of this story is from The Woman in Orbit

Return to Marian Calendar August from Our Lady of Copacabana

Return to Titles of Mary from Our Lady of Copacabana