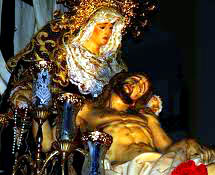 Our Lady of Compassion

Our Lady of Compassion


The convent of Our Lady of La Piedad dates back to the year 1595. Don Luis de VelascoII, when he was Viceroy of New Spain, had as his confessor a Dominican, Fray Cristobal de Ortega, who also acted as his financial adviser. In gratitude for the friar’s diligence and loyalty to his interests for many years, Don Luis presented the Dominican Order with the convent on the twelfth of March, 1595.

Shortly afterward, a Dominican religious, accompanied by a Lay Brother, had to go to Rome on business for the Order. The religious of the new Convent of La piedad commissioned him to bring back a painting of Our Lady under her title of La Piedad, that is, “Compassion,” representing the sorrowing Mother holding in her arms the lifeless body of her Divine Son. Rome in that day was the home of many outstanding painters, and the friar was charged with securing the best possible work of art.

On arrival, the religious asked an artist of great merit to accept the commission. The painter agreed, but would not set a date upon which he would undertake to have the picture ready. In vain the friar tried to fix the time, saying that he had to return to Mexico very soon, and could not leave without the painting. But the artist only replied that he could not promise it by any definite date, since he worked only when inspiration came to him.

Finally, when they came to an agreement on the conditions under which the artist would accept the assignment, the Dominican began to describe the general outlines of the picture he wanted. Brusquely the artist cut him short. He knew his business; all the good friar had to do was wait. When the painting was ready, he would be notified.

The Dominican left the studio with mixed emotions. He had secured the artist’s promise, true. On the other hand, the great man had shown very little interest in the project.

Time went by, and no word came from the artist. Very soon the religious would have to return to Mexico. Finally he could wait no longer. With some misgivings he visited the studio. Had the painting been finished?

“Finished?” answered the artist, with haughty indifference. “Why, I have scarcely begun to make a sketch of it!”

The poor friar did not know what to do. His superiors had ordered him to leave for New Spain the following morning. For some time he stood in thought, and at last he said:

“I will take back the sketch, at least, so that they may see it is no fault of mine.”

“And what good will a simple sketch do?” asked the painter.

“In Mexico, we shall find someone who can finish the painting.”

“Only one brush can complete this picture,” replied the painter; “mine!”

“But I mean, with the help of God!” burst out the friar.

These words, uttered with such simple faith, shook the artist from his indifference – something that even a bag of gold pieces would not do – and he handed over the sketch.

A month later, the friar and his Lay Brother companion were in mid-ocean, bound for New Spain. Suddenly a storm arose, the like of which in ferocity and intensity the crew and passengers had never before experienced.

“Padre! We shall be drowned!” they cried in terror.

“Have confidence in Our Lady, Star of the Sea,” the priest answered serenely. “She can calm the waters with a glance.”

“We will promise her a thank-offering if she spares our lives,” they said.

“Then let us make a promise to Our Lady,” replied the friar, “to build her a sanctuary in Mexico.” And so they promised.

At once the storm began to subside, and soon the sea was calm again. The grateful crew and passengers, mindful of their promise, made generous offerings.

Shortly thereafter the ship arrived at Veracruz, and the two Dominicans made their way overland to Mexico City. Their fellow religious at the Convent of La Piedad were considerably chagrined to learn the inconsequential outcome of the friar’s business with the Roman artist. Some complained that they might have secured a suitable painting in Mexico, for a fraction of the cost, and much more quickly. Others said it might be a chastisement from God for their vanity in choosing a famous artist to do the work. With many misgivings, they set about opening the crate in which the sketch had crossed the ocean. As they were unrolling the canvas, signs of color were seen, but they assumed that some paint had adhered to it in the artist’s studio. Their astonishment increased as they continued unwrapping the canvas, and when it was exposed to view, they gazed at it in silence, unable to take their eyes from the painting. For painting it was, of extraordinary beauty and perfection, depicting the Mother of Jesus holding her crucified Son.

“No doubt our brother sought to surprise us,” said one.

“But he would not tell a falsehood for that,” replied others.

So absorbed were they in the painting that it was some time before they saw that the two newly returned religious were still on their knees before the picture, overcome by the marvelous outcome of events. When they were at last able to speak, they related the circumstances in which they had acquired a rough sketch for the painting. They added the tale of the storm at sea and the near-shipwreck. They told how the crew and passengers had come to them with the promise to build a shrine for the Virgin if she spared their lives. When they had concluded their recital, all agreed that the hand of God had played a part in the supernatural affair of the painting.

From that time the religious of the Convent of La Piedad preached devotion to Our Lady in her image. Notable miracles have been worked through her intercession, and many of the most outstanding have been certified by formal process before the ecclesiastical tribunal.

This venerable image today hangs in the new sanctuary of Our Lady of La Piedad. It is an oil painting on canvas nearly nine feet high and eight and a half feet in width, in a wood frame, today covered with glass. The picture symbolizes the supreme moment when the Son of God, having enacted the drama of Calvary, lay in the arms of His Mother. A soft, clear light illumines the whole, and the colors are as fresh and bright as though the scene had been painted yesterday, instead of more than three and a half centuries ago.

Many indulgences have been granted to the Church of La Piedad, and it has been erected into a Minor Basilica.

Return to Titles of Mary from Our Lady of Compassion

Return to Roman Catholic Saints Homepage from Our Lady of Compassion