Our Lady of Chartres miracle 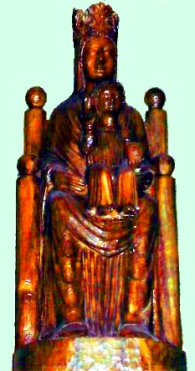 December 31: Image of Our Lady of Chartres brings back to life the son of King Geoffrey (100BC)

The Abbot Orsini wrote: “About a hundred years before the birth of our Savior, the image of Our Lady of Chartres, which the Druids had consecrated to the Blessed Virgin, parturient, raised to life the son of Geoffry, king or prince of Montlhery, who, having fallen into a well, had been found dead; out of gratitude for this favor, he made several presents to this image, as the history of this miracle attests, which is represented in the stained glass of the great church.”

To Chartres belongs the distinction of being not only the oldest shrine in France, but also – in all probability – the oldest shrine of Our Lady in the world. It is actually pre-Christian, and in a case similar to the Athenians’ ‘altar to the unknown god,’ was dedicated to the Virgin who would bring forth a son, at least a century before the birth of Christ.

The Cathedral of Notre Dame at Chartres is probably the most beautiful Gothic church in the world; but far predating the Christian cathedral, the location was famous for its crypt – and the shrine of Our Lady of the Underground. It is known that Chartres was long the site of the Druid’s most important sanctuary, and where they worshiped an image that came to be known as Our Lady of Chartres. Indeed, Chartres was a kind of pilgrimage destination long before the construction of the beautiful Gothic cathedral we see standing there today.

Our Lady of Chartres miracle

Before Julius Caesar came to Gaul, the Druid’s had already fashioned a statue in the image of a woman seated with a child upon her lap, for they somehow understood that there would be a woman who would give birth to a child like none other ever seen upon the face of the earth. Perhaps they knew of Isaiah’s prophesy, “…the Lord Himself shall give you a sign. Behold a virgin shall conceive, and bear a son, and His name shall be called Emmanuel.”

This image was kept on an altar in the crypt that bore the motto ‘Virgini Pariturae’ – ‘to the virgin who will bear a child.’ Even though they were pre-Christian, these Druids awaited the One who would prove the old gods to be nothing but mere idols of clay and stone. Later, with the coming of Christianity, they learned that the virgin and child foretold to them were the Blessed Virgin Mary and Our Lord Jesus Christ, and they converted and demonstrated joyful devotion to them in their image of Our Lady of Chartres.

The well the Abbot Orsini refers to also dates back to Gallic times and the Druids, and it was also located in the crypt. ‘The Well of Strong Saints,’ or ‘Puits des Saints-Forts,’ the Christians came to call it, for the bodies of many early Christian martyrs were cast into that well. The well can still be seen there, although it is now dry.

The ancient statue of Our Lady of the Underground was destroyed during the French Revolution, and a copy is now in its place. It is interesting to note that this depiction of the Divine Child seated upon His Mother enthroned is quite similar to later statues of the Middle Ages known as Sedes Sapientiae, or ‘Seat of Wisdom,’ such as can be seen in Our Lady of Louvain, that become very popular in the 13th century.

Thus, for many reasons, Chartres and Our Lady of the Underground have long been one of the main pilgrimage sites in France.