Our Lady of Calais 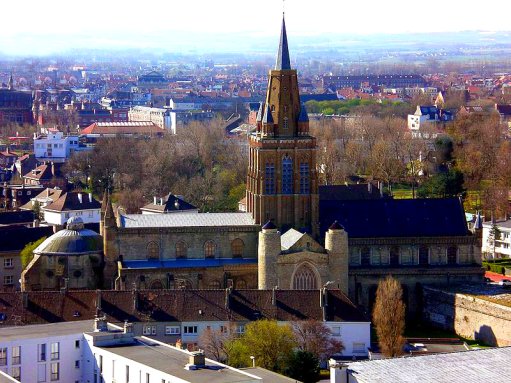 
For a whole year the town of Calais in France was besieged by the English, who had lost many troops during the siege.

Starvation finally forced the French to consider giving up, but the English King, Edward III, would not accept their surrender unless six citizens of Calais came before him bare-headed, bare-footed, dressed in rough shirts, and each with a halter about his neck. He demanded the keys of Calais, and that these men accept his pleasure, however severe, before the rest of the citizens would receive any mercy.

The entire population prayed to Our Lady of Calais, which had been damaged during the war. Those who could do so knelt at her shrine. This shrine had been built by the English while they had possessed that city, of which they had been masters for two hundred and ten years.

No one wanted to give his life in such a manner. Finally a nobleman stepped forward and offered his head as a ransom to the English king so that the city of Calais should be spared. Five others then volunteered, all dressed as the king had demanded. When they stood before the irate king he angrily reminded them of the losses he had suffered through their stubbornness; then he ordered the six citizens to be beheaded.

The king’s bravest and noblest warriors pleaded with him to spare the men, but in vain. Then Queen Philippa arose from her seat beside the king, and kneeling before him with tears streaming down her cheeks, pleaded:

Our Lady of Calais

“My lord and husband, I have crossed the sea through many dangers to be with you. Let me now pray you to have pity on these six prisoners.”

After a few minutes of deep thought the king declared:

“Madam, I wish you had been elsewhere this day. I cannot deny the boon you ask me. Take these men and dispose of them as you will.”

The gracious queen gave the six hostages better clothing, each a certain amount of money, and had them safely brought back through the lines and set at liberty to return home.

The king, humiliated at his queen’s mercy, spared the town. Queen Philippa was a figure of Our Lady, interceding for these men and obtaining mercy for them just as the Blessed Virgin Mary, Gate of Heaven, will do for us if we make her our advocate before God. From that time on Our Lady of Calais was ever more recognized as the merciful Mother of Calais.

A magnificent chapel was added to the shrine of Our Lady of Calais in the year 1631 by James de Bolloye, cure of Calais.

Return to Marian Calendar June from Our Lady of Calais

Return to Titles of Mary from Our Lady of Calais

Return to Roman Catholic Saints Home Page from Our Lady of Calais
[?]Subscribe To This Site