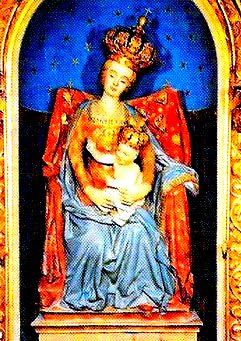 June 29: Our Lady of Buglose, France


Located about two leagues from Acqe in Glascony is the shrine containing a miraculous image of Our Lady of Buglose. The original shrine of Notre Dame de Buglose was burned and completely destroyed by the Huguenots, and the statue of Our Lady was hidden in a marsh. The exact location of the statue was eventually forgotten, as was the memory even that the place had once been the location of a shrine in honor of the Blessed Virgin.

Years later, a shepherd led his herd into the marshes and observed that one of his oxen did not go with the others, but went into an area of the marsh alone and began to bellow in a strange manner. The shepherd climbed a tree to see what was happening, and saw the ox licking an unknown object that was half buried in the mud. Not understanding the mystery, he ran into town to bring others back with him to see what had happened.

When the shepherd returned, the statue of the Blessed Virgin holding the baby Jesus in her arms had been revealed. It was respectfully removed from the water, and the bishop of Dax desired to take the image to his church in Pouy. He placed the statue in a cart that was pulled by oxen to transport it back to Pouy. The procession began with hymns and prayers, but had only gone a short distance when the oxen stopped and would not move any further. It was understood that the Blessed Virgin desired that her image should stay near the fountain.

The bishop accepted the revelation as a divine order, and thanks to the zeal and enthusiastic support of the people living in the region, a new church was built with prodigious speed. The shrine was for a long time popular as a place of pilgrimage in France; now it is further renowned as the birthplace of Saint Vincent de Paul. The house where he was born and where he spent his boyhood is still shown.

There have been many miracles at the shrine, as indeed Buglose had become known as a land of miracles. There were 19 miracles recorded in the year 1622 alone.

There is a fountain near the chapel marking the place where the statue of Our Lady of Buglose was found buried. In 1623, a man named Bernard Ducassou came to the shrine seeking a cure for the seven boils that covered his left leg. He spent the entire night in prayer, and the next day bathed at the fountain. The ulcers that would not heal were suddenly closed.

The above pilgrimage is merely a side issue for pilgrims on their way to the famous shrine of Our Lady where miracles are still granted to pious devotees.

Return to Marian Calendar June from Our Lady of Buglose


Return to Titles of Mary from Our Lady of Buglose

Return to Roman Catholic Saints Page from Our Lady of Buglose