Our Lady of Buch 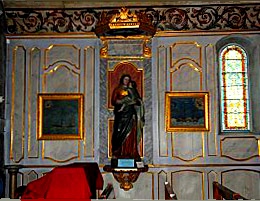 According to the Marian Calendar, Our Lady of Buch is located in the Pine Mountains, in Guienne. The sea cast this image upon the sands, while Saint Thomas, the Cordelier friar, was praying on behalf of two vessels which he saw in danger of perishing. He respectfully received this image and deposited it in this place, in a small chapel which he built there.

Guienne, or Guyenne, refers to a loosely defined region of pre-revolutionary, South-Western France. Buch, or La Teste-de-Buch, is a commune in the Gironde department in Aquitaine, located on the south shore of Arcachon Bay.

The “Cordeliers,” known also as the Grey Friars for the heavy grey cloth they wore, are Franciscans. Their belt was but a rope with five knots tied at the end, which gave them their name in France. The “Saint Thomas” mentioned is Thomas Illyricus (1484-1528), a Franciscan native of Vrana in the diocese of Zarian. He was never canonized, although he was a hermit and itinerant preacher and an indefatigable traveler who lived near Arcachon in la Teste-de-Buch. It was he who built the chapel of Notre-Dame Arcachon.

Our Lady of Buch

“More than his voice, vibrant with emotion,” wrote the Abbe Mauriac, “more than his ascetic appearance, more than his style so direct and so strong, what stirred and attracted thousands of listeners was his ardent sincerity which overflowed and poured itself out, while his love of God and of souls accented his words and made him very eloquent.”

It was in the year 1519 that Thomas Illyricus found the famous statue now known as the Virgin of Advent at the edge of the sea. He built a shrine of wood that same year for the statue, and pilgrimages date from 1525 and took such a scale that in 1624 the Cardinal Francois de Sourdis authorized the construction of a stone chapel. This small chapel was gradually buried by the sands, and it was decided to build a new one which was completed in 1723. The church is known as the church of L’eglise Notre Dame des Passes, or Notre-Dame Arcachon. Many miracles have been wrought through devotion to Mary at the shrine, and the church is dedicated to sailors who face the channels for entry into the Arcachon basin.

There is a tall cross known as the Sailors Cross which stands at the end of the pier of the chapel. Built at the same time as the construction of the chapel in 1722, the original was cut down by a gale in 1855 and was replaced by the one that we see today. It was once customary for sailors to greet the Cross with two blasts from their fog horn to appeal for divine protection when they went out on the ocean and faced its dangers.

Mary is particularly interested in seafarers and folk living near waters. She who was so familiar with the Sea of Galilee and the profession of the twelve pillars of her Son’s Church; still is vigilant for their welfare and happiness.