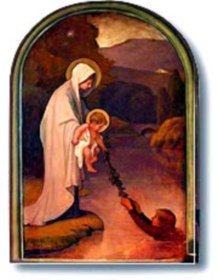 The Abbot Orsini wrote: “Our Lady of Betharam, in the diocese of Lescar, in the province of Bearn. This image was found, in the year 1503, by some shepherds, who, seeing an extraordinary light on the spot where the high altar of the chapel now stands, came up to it, and found there an image of Our Lady, for which they had a chapel built immediately.”

More commonly known as the Shrine of Betharram, it is located only 15 kilometers from the more famous Marian shrine at Lourdes. It used to be a very popular pilgrimage destination, as according to Saint Vincent de Paul, Betharram was once the second most popular place of pilgrimage in France. The river Gave, beside which the shrine is located, is the same river whose waters flow past Lourdes.

The shrine of Our Lady of Betharam is famous for no less than three miracles attributed to the Blessed Virgin Mary.

According to tradition, one day in 1503 there were some shepherds leading their flocks along the bank of the river Gave when they suddenly observed an extremely bright light coming from the rocks. When they drew nearer, they found a beautiful statue of the Blessed Virgin. Learning of the incident, the people in the nearby village of Lestelle decided to construct a chapel to house the statue. Due to space limitations, the chapel was initially planned for the opposite bank from where the statue had been found. Once the statue was placed there, however, they found that it would always return on its own to the other side of the river where it had originally been found. The faithful then understood that the Blessed Virgin desired that the chapel should be built where the statue had been found, and so it happened.

The next miracles occurred in the year 1616 when some peasants from the village of Montaut were returning home from the fields at the end of the day. A rushing storm suddenly appeared, with fierce winds that threatened Betharram. In fact, the laborers saw that there was a cyclone in the storm that beat against the great wooden cross that had been erected at the summit. The cross fell, but then was encircled by a radiant aura of dazzling light before standing again of its own to its former position.

The third miracle is the one after which the shrine is named. Apparently a young girl fell headfirst into the Gave when trying to pluck a flower along the bank. The water runs fast and deep in this area, and the girl was on the verge of drowning when she cried aloud to Our Lady of Betharam of the nearby shrine. The Blessed Virgin appeared standing on the bank holding the Divine Infant, who held a branch which he extended to rescue the girl. She offered a golden branch to the shrine as an ex-voto offering. A beautiful branch is ‘Betharram’ in the local dialect, and thus became the name of the shrine.

There were many other miracles, as at one point between the years 1620 and 1642 there were 82 documented miracles involving the blind who received their sight, the paralyzed who regained the use of the limbs, and those instantly cured of cancer, among other miracles.

The cross on the summit that the winds could not destroy was finally destroyed by the folly of man during the French Revolution. The property was unlawfully confiscated and the chaplains expelled.

Saint Pope Pius X was known to be devoted to Our Lady of Betharam. He offered her two magnificent golden crowns made up of branches woven together. This prayer accompanying the inscription stated: “May the Son and His Mother accept our gifts and by appeasing our hopes and desires may they keep for us one day the crown of glory which none can tarnish.”