Our Lady of All Help 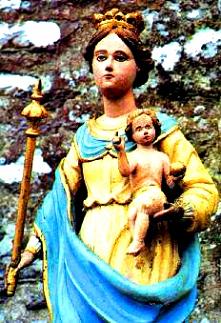 This shrine of Our Lady dates back to the year 1640, although the statue had been in the same abbey for probably two centuries before any miraculous occurrence was noticed. As the statue was rather faded, it was not thought stylish enough to be displayed in the chapel. It was therefore placed under a staircase near the infirmary, where its most frequent visitor was the old lay sister who had charge of sweeping the corridor.

One day as the sister was busy about her work, the statue spoke to her and told her to hurry up to the infirmary because one of the sisters needed her right away. The sister the statue named was not one of the patients, but was actually the nurse who cared for them. The lay sister thought the nurse had seemed perfectly well a short time before, and saw no particular reason to think that she was in any danger of dying. Still, she went as she was told and found the nurse as she was dying. She had arrived just in time to summon the priest to administer the last rights to the dying nurse.

Our Lady of All Help

Shortly after this miracle became known, there was a second one just as remarkable. There was a community benefactor whose son was at death’s door with a high fever. Invoking Our Lady before this same statue the man saw his son instantly cured.

After this second incident the statue was moved into the chapel, and there were many miracles that followed. One miracle was worked in favor of a sister who had been terribly burned; she was instantly cured. A priest, falsely accused of a crime, was acquitted after special prayers to the “miracle lady.” The statue had had no name before this, but the parishioners decided now to call her Our Lady of All Help, Quick Help, or Our Lady of Good Remedy.

The statue itself is only about two feet tall. The Blessed Virgin Mary is crowned, and holds her Infant Son in one arm, and a scepter in the other.

There is a short and very lovely prayer which for centuries has been associated with this statue. It is, “Oh, Mother of All Help, say but one word in our behalf to Thy Divine Son, for he cannot refuse thee any favor. Amen.”

Return to Marian Calender October from Our Lady of All Help

Return to Titles of Mary from Our Lady of All Help