Our Lady of Aix la Chapelle 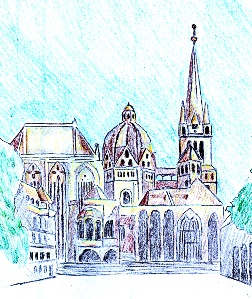 
The city of Aachen today is a quiet town; still, there is hardly another city in Germany which could equal its past glory. It was a place famous for its springs during the Roman era, and later the location of the royal court during the time of the Merovingians. Most importantly, however, this was the town of Charlemagne (768-814), and it remained the capital of the Holy Roman Empire until the middle of the sixteenth century. Thirty-seven German Emperors were crowned in Aschen. It was made the capital by Charlemagne and a great part of its lasting fame dates from his reign.

One of the first desires and orders of Charlemagne was to build a Lady Chapel because of his deep devotion to the Blessed Virgin. Our Lady of Aix la Chapelle, built by Charlemagne in honor of the Blessed Virgin Mary, was consecrated by Leo II in the year 804. This was the same year the Saxons submitted to the emperor, and there were assembled three hundred and fifty prelates for the consecration ceremony.

The antique bronze doors of Our Lady of Aix la Chapelle are surmounted by regal lion heads, and they date from the time of Charlemagne. The short pillars of what is called the nave support an octagon shaped cupola of 50 feet in diameter. They date from the 12th and 13th centuries, and were brought from Rome for that purpose. These pillars were intentionally damaged by the atheistic proponents of the French Revolution, though they were thankfully restored in the year 1845.

Our Lady of Aix la Chapelle

The elegant Choir of Our Lady of Aix la Chapelle is filled with marvelous stained glass windows. This was a later addition to the church, completed in 1413, and is done in a completely separate style. One of the chapels of the cathedral has immeasurable treasures for the Christian world, as Charlemagne took pride in securing for the cathedral as many important relics from the Holy Land and Rome as he could. This pious practice was continued by his successors and it explains why the cathedral is so treasured by the Christian world.

In fact, the church of Our Lady of Aix la Chapelle holds innumerable precious offerings, including the four so-called great relics that are locked in a shrine that was given to the church by Frederick Barbarossa in the 12th century. These relics are the cloak of the Blessed Virgin, the swaddling clothes of the Infant Jesus, the loin cloth worn by Our Lord on the Cross, and the cloth on which lay the head of Saint John the Baptist following his beheading. These are exhibited only once in every seven years, and attract vast crowds of pilgrims.

Among the numerous smaller relics are a part of the true Cross, the cord which bound Our Lord, the sponge that was used to offer Our Lord gall during the crucifixion, and the girdle of both Christ and the Blessed Virgin. All are preserved in richly ornamented chests. Other treasures exhibited include the skull, heart, and gigantic arm bones of Charlemagne, and the cross he wore around his neck in the tomb. Judging by his bones, Charlemagne was a man of astonishing size, which was matched by his equally amazing intellect. 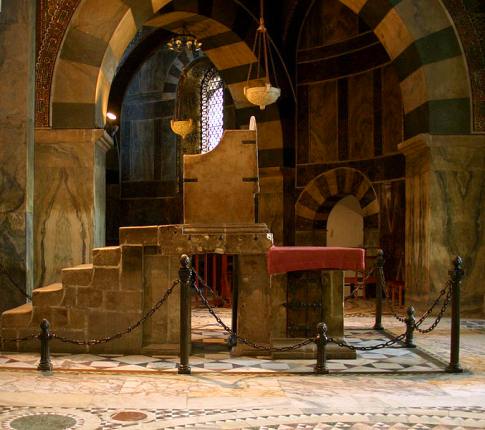 The tomb was opened in the year 1000 by Otho III, and the body of the great emperor was found seated upon a magnificent marble throne and wearing a golden crown. Only the nose of the great Charlemagne showed any sign of decay. The imperial mantle was thrown over his broad shoulders, and he held a globe in one hand, a splendid scepter in the other, and there was a sword at his side. This throne was later taken by Barbarossa in the year 1166, as he coveted the throne for his own coronation. It was subsequently used for the coronation of thirty-six emperors in that same church.

The last time the four great relics were displayed was the year 2007.