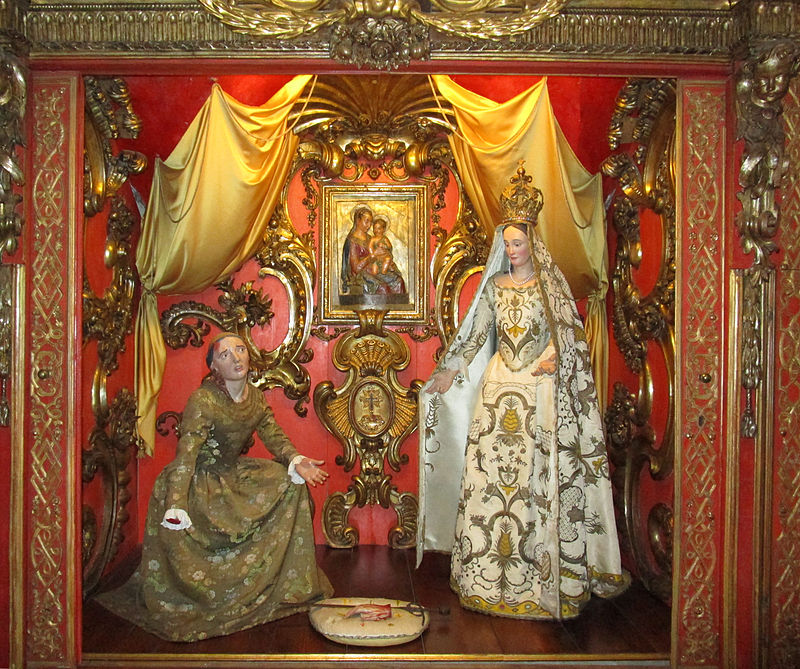 
There is a sanctuary of the Madonna on the Bergamo Road, about a mile away from the city of Crema, Italy. The structure is a circular form, with four additions in the shape of a cross, which gave rise to the name: “Holy Mary of the Cross,” or Our Lady Della Croce. The sanctuary is located in a place where, in years gone by, there stood a dense little wood called “Il Novelletto.”

In the late 15th century a young woman named Caterina Uberti lived with her brother in the city of Crema. When she arrived at marriageable age, her brother induced her to wed one Bartolomeo Petrobelli; it was an unfortunate arrangement – Caterina was good and pious; Bartolomeo was quite the opposite, tending toward the wicked and corrupt. The marriage was unhappy for Caterina and uncomfortable for Bartolomeo – his rather crude and brutal ways shamed her, while her refined and holy life was a silent reproach to his somewhat scandalous mode of living.

So, after a year of turmoil, Bartolomeo decided to kill Caterina. Having made up his mind, he lost no time in carrying out his evil design.

He suggested that they journey to Bergamo and visit his parents; she agreed, and in the late afternoon of April 3, 1490, they mounted their horses and set forth from the city. When they arrived at the wood about a mile from Crema, Bartolomeo left the highway and rode into the forest; Caterina was puzzled, but not knowing what else to do, followed him. When they reached the middle of the wood, Bartolomeo dismounted and made Caterina get down from her horse.

Then, without warning, he drew his sword, raised it and fiercely brought it down, intending to split her head with one clean cut. Instinctively she drew up her arm to ward off the savage blow, saved her head, but lost her right hand – the poor severed hand hung from the stump of her arm by a strip of skin, and Bartolomeo brutally tore it off and flung it to one side. He then slashed at her like a maniac until she fell to the ground in a pool of blood; thinking her dead, he leaped on his horse and fled.

Caterina was not dead, nor was she afraid to die, though she felt her time was short. With all her dying heart she wished for the Last Sacraments; so she prayed to the Mother of God, who heard her prayer. A glow of light pushed back the gathering darkness and a beautiful lady approached her. Reaching down, the Lady, Our Lady Della Croce, took her by the arm and helped her rise – the blood stopped flowing and new life coursed through her mutilated body.

The Lady bade Caterina follow her, but Caterina asked if she might look for her lost hand. The Lady promised it would be returned to her in due time. Taking Caterina to a hut, she told her these people would help her and then vanished. The kind peasants did all they could for Caterina, and the next morning they placed her on a rude stretcher and tenderly carried her back to Crema.

As they passed through the wood, one of the men found the severed hand and returned it to Caterina. They took her to the Church of St Benedetto, where the pastor, after hearing the story, anointed Caterina who died there. The story spread rapidly; some believed, others doubted that the Blessed Virgin worked such wonders.

An eleven year old boy, living in Crema plagued with an unhealable abscess on a foot, begged to be taken to the wood to put his foot on the spot where the Lady appeared. His mother and a group of relatives carried him there, and he was instantly cured, all abscess traces gone.

Many other sick and infirm came also and were cured. The people erected a small chapel on the spot and placed in it a plaster image of Our Lady. More favors followed; many offerings were made by the faithful and in a few years a fitting sanctuary to the Madonna was completed by 1500. Later a fine new statue of Mary was enshrined in the Sanctuary and in 1873 Our Lady Della Croce was crowned with a golden crown by order of the Vatican.

Return to Titles of Mary from Our Lady Della Croce