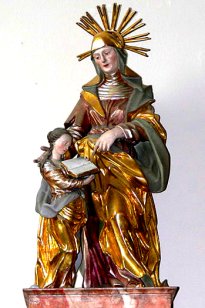 September 22: The Giving of the Name of Mary to Our Lady by St. Ann, her mother

In this divine consistory and tribunal of the Most Holy Trinity it was determined to give a name to the Child Queen. As there is no proper and legitimate name, except it be found in the immutable being of God Himself (for from it are participated and determined according to their right weight and measure all things in infinite wisdom) His Majesty wished Himself to give and impose that name in heaven.

He thereby made known to the angelic spirits, that the three Divine Persons had decreed and formed the sweet names of Jesus and Mary for the Son and Mother from the beginning before the ages, and that they had been delighted with them and had engraved them on their eternal memories to be as it were the Objects for whose service they should create all things.

Being informed of these and many other mysteries, the holy angels heard a voice from the throne speaking in the person of the Father:

“Our chosen One shall be called MARY, and this name is to be powerful and magnificent. Those that shall invoke it with devout affection shall receive most abundant graces; those that shall honor it and pronounce it with reverence shall be consoled and vivified, and will find in it the remedy of their evils, the treasures for their enrichment, the light which shall guide them to heaven. It shall be terrible against the power of hell, it shall crush the head of the serpent and it shall win glorious victories over the princes of hell.”

The Lord commanded the angelic spirits to announce this glorious name to Saint Anne, so that what was decreed in heaven might be executed on earth. The heavenly Child, lovingly prostrate before the throne, rendered most acceptable and human thanks to the eternal Being; and She received the name with most admirable and sweet jubilation.

The holy angels honored and acknowledged Most Holy Mary as the future Mother of the Word and as their Queen and Mistress enthroned at the right hand of her Son; they showed their veneration of her holy name, prostrating themselves as it proceeded from the throne in the voice of the eternal Father, especially those, who had it written on the devices over their breast.

On the eighth day after the birth of the great Queen, multitudes of most beautiful angels in splendid array descended from on high bearing an escutcheon on which the name of MARY was engraved and shone forth in great brilliancy. Appearing to the blessed mother Anne, they told her that the name of her daughter was to be MARY, which name they had brought from heaven, and which Divine Providence had selected and now ordained to be given to their child by Joachim and herself.

The more than happy father accepted the name with joy and devout affection. They decided to call their relatives and a priest and then, with much solemnity and festivity, they imposed the name of Mary on their Child. The angels also celebrated this event with most sweet and ravishing music, which, however, was heard only by the mother and her most holy Daughter.

Thus was the divine Princess named by the Holy Trinity; in heaven, on the day of her nativity, and on earth, after eight days.

*from The City of God, by Venerable Mary of Agreda