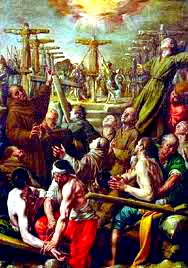 
About the year 1592, Hideyoshi, the military dictator of Japan, planned to invade and conquer the Philippine Islands, situated near his domain but belonging at the time to the Spanish crown.

To negotiate peace, King Philip II of Spain delegated Father Peter Baptist Blasquez, a Franciscan of Manila, as his ambassador to Hideyoshi.

Peter Baptist, who came from an ancient Spanish family of the nobility, was learned, capable, and known for his holy life. He arrived in Japan with three companions at the end of the month of June, 1593. He succeeded in winning the dictator to terms of peace, and even obtained permission to spread Christianity throughout Japan without interference.

So Peter Baptist founded several convents of his order, built churches and hospitals, and in company with his associates, converted hundreds of pagans to Christianity. Hideyoshi even offered them a neglected temple in his capital city Miyako, with permission to rebuild it as a church.

The Japanese bonzes were much incensed at the turn of events. They got the dictator to believe that the missionaries had in mind to dethrone him and deliver up the country to the Spaniards.

Enraged, Hideyoshi ordered the Franciscan missionaries and their helpers to be imprisoned and put to death as offenders against the crown. Forthwith the soldiers invaded the friars convents in December, 1596, and imprisoned the inmates. Peter Baptist was among the prisoners, together with his companions, the two priests Martin of the Ascension and Francis Blanco, the cleric Philip of Jesus, who was a native Mexican, the two lay brothers Francis of St. Michael and Gonsalvo Garcia. Included were also 17 Tertiaries who rendered services to the missionaries as catechists, teachers, sacristans, and infirmarians; likewise three Jesuits. They are now known as the Martyrs of Japan.

On January 3, 1597, the martyrs of Japan were all led out of their cruel prison to the public square at Miyako. Here they were informed that they were to be crucified, and as a mark of dishonor a portion of their left ear was cut off. Then they were driven through the city on hurdles, while the sentence of death was carried on a pole at the head of the procession, and the rabble was given free hand to illtreat and insult them.

On January 4 the martyrs of Japan were again bound and thrown on hurdles, to be taken to Nagasaki for execution. The sad journey lasted 4 weeks, which in itself was cruel martyrdom because of the brutality of the bailiffs and the fury of the people in the towns and villages through which the martyrs passed. To this were added cold, hunger, and privations of every sort.

They arrived at Nagasaki on the morning of February 5th. The crosses on which the glorious confessors were to die had been prepared on a hill outside of town. The martyrs were immediately taken there and each one was bound to his cross. With loud voices they thanked God for the grace of being permitted to die like Christ their Lord, and they praised Him with psalms and hymns.

As the martyrs hung crucified, executioners ran the body of each one through transversely with two spears, Father Peter Baptist being the last.

Hardly had the martyrs breathed forth their souls when God glorified them with extraordinary signs and marvels. In consequence, Pope Urban VIII beatified them in the year 1627 and permitted the annual celebration of the feast of the Japanese martyrs.

In the feast of Pentecost, June 8, 1862, in presence of a great number of bishops assembled from all parts of the world, Pope Pius IX inscribed them in the catalog of the saints as powerful intercessors against enemies of the holy cross.

The names of the Nagasaki Martyrs:

• Antony Deynan
• Bonaventure of Miyako (Meaco), OFM Tertiary. A Japanese native who became a Franciscan tertiary and catechist. (He may only have been beatified and isn't included in the group of 26 who were canonized).
• Caius Francis, OFM Tertiary. Japanese soldier who had only recently been baptized and received as a Franciscan tertiary. He insisted on being arrested with the friars.
• Cosmas Takeya (Tachegia, Zaquira), OFM Tertiary, lay Franciscan from Owari, Japan, who served the Franciscan missionaries as interpreter and preached in Osaka.
• Diego (James) Kisai (Kizayemon) SJ, a Japanese layman who was the temporal coadjutor of the Jesuits and a catechist in Osaka. Like John Gotto, he was admitted to the Society of Jesus while he was imprisoned, just before his death at age 64.
• Francis Blanco
• Francis Falename
• Francis of Nagasaki
• Francis of Saint Michael
• Gabriel de Duisco
• Gundisalvus Garcia
• James Kisai
• John Kisaka (Kimoia), OFM tertiary, Japanese silk-weaver, born at Miyako. He was baptized and received into the third order shortly before his crucifixion.
• Joachim Sakakibara (Saccachibara), OFM Tertiary, Japanese lay cook (another source says the physician) for the Franciscans at Osaka, who also served as a catechist.
• John Soan de Goto, Jesuit, 19-year-old native Japanese who was admitted to the Jesuits in prison shortly before his martyrdom. Prior to that he was a temporal-coadjutor of the Society of Jesus and catechist at Osaka.
• Leo Karasumaru (Carasuma), Korean; pagan priest prior to his conversion to Christianity. He was baptized by the Jesuits in Japan in 1589. He became the first Korean Franciscan tertiary and was the chief catechist for the friars. With him was crucified his brother Paul Ibaraki and their 12-year-old nephew Louis Ibaraki.
• Louis Ibaraki (Ibarki), 12-year-old nephew of Paul Ibaraki and Leo Karasumaru, who served as acolyte for the Franciscans.
• Martin Loynaz (de Aguirre) of the Ascension, OFM, a native of Vergara near Pamplona, Spain. He studied in Alcala and became a Franciscan in 1586. He first worked as a missionary in Mexico, then Manila in the Philippines, and finally in Japan.
• Matthias of Miyako, OFM Tertiary, Japanese native, became a Franciscan tertiary.
• Michael Cozaki, Japanese catechist and hospital nurse to the Franciscan missionaries. He was martyred with his own son, Thomas.
• Paul Miki
• Paul Ibaraki (Yuanki, Yuaniqui), Franciscan teriary, brother of Leo Karasumaru and a lay tertiary, interpreter, and catechist.
• Paul Suzuki, OFM Tertiary, born 1563, a native of Owari, Japan, was baptized by the Jesuits in 1584, became a Franciscan tertiary, and was an outstanding catechist until he, too, was crucified near Nagasaki.
• Peter Baptist
• Peter Sukejiroo, Peter Sukejiro, Peter Xukexico, OFM tertiary, Japanese Franciscan tertiary who served as a catechist, house servant, and sacristan to the Franciscan missionaries. He was sent by a Jesuit priest to help the prisoners, and was then arrested.
• Philip de las Casas, OFM
• Philip of Jesus
• Thomas Kozaki, Thomas Cozaki, Thomas Kasaki, 15-year-old Japanese native, who served as acolyte and was martyred with his father, Michael.
• Thomas Xico (Dauki), OFM Tertiary, a Japanese Franciscan tertiary, catechist, and interpreter to the missionaries.
• Ventura, a Japanese layman from Miyako who was baptized by the Jesuits, gave up his Catholicism on the death of his father, and brought back to the Church by the Franciscans.