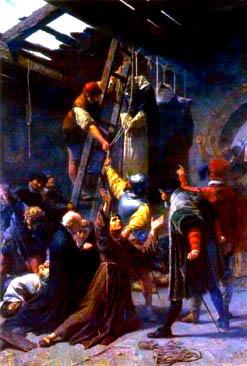 Martyrs of Holland
St Nicholas of Gorcum and Companions


There were especially two dogmas of the Faith that were attacked by the heretics of the 16th century: the Real Presence of Jesus Christ in the Eucharist and the Primacy of the Roman Pontiff. The Calvinists in Holland persecuted with relentless fury the confessors of the Catholic Faith. The holy martyrs gave their lives particularly in defense of these two fundamental doctrines.

When the Calvinists, who had set themselves against all ecclesiastical as well as civil authority, took possession of the city of Gorcum, they retained 19 of the clergy as prisoners, though they had promised to let the inhabitants depart from the town without being molested. There were four secular priests among the prisoners, four priests of other religious orders, and 11 Friars Minor of the convent at Gorcum. The latter were the guardian, Father Nicholas Pieck; his vicar, Father Jerome of Weert; Fathers Wilhad, an old man of 90; Theodoric of Emden; Nicaise Jonson, a learned theologian; Godfrey of Mervelan; Anthony of Weert; Anthony of Hornaer; young Father Francis Rod; and 2 lay brothers, Peter van Asche and Cornelius of Dorstat.

Cast into a filthy prison, they were cruelly treated during the first night by the drunken soldiers. They seemed to vent their hellish rage principally against the guardian, Father Nicholas. Taking the cord which he wore around his waist and putting it around his neck, they dragged him to the door of the prison and threw the cord across it in order to hang him at once. But as a result of pulling the cord back and forth against its weight, the cord tore, and Father Nicholas fell to the earth unconscious. In order to make sure that he was dead or just for the purpose of outrage, the persecutors took a burning candle and burned off his hair and eyebrows, applying the flame also to his nose and open mouth. With a parting laugh of derision, they then left the motionless body in order to torment the others. They struck the face of the aged Father Wilhad with savage blows, but each time he merely said, "Deo gratias! Thanks be to God!"

After the miscreants had departed, Father Nicholas regained consciousness, for he had only fainted. As soon as he was able to speak again, he encouraged his brethren, declaring that in defense of the Faith he was ready to undergo the same torments again, and even more cruel ones, if it so pleased God, and as often as it pleased God. "For" he said, "the sufferings of this present time are not worthy to be compared with the glory to come that shall be revealed in us."

On the following day several attempts were made to cause the friars, and in particular their superior, to apostatize. The Calvinists opened a discussion with them about the Blessed Sacrament and the primacy of the pope. But the heretics soon found themselves cornered by the clear proofs advanced by the guardian and his brethren. They hoped to be able at least to deceive one of the lay brothers, but he answered very simply that he was in accord with everything that his guardian had said.

Meanwhile, the relatives of Father Nicholas, especially his two brothers, were making every effort to obtain his deliverance. But, like a good shepherd, the guardian declared: "I will not leave prison unless my brethren come with me, and even though there were only one detained, and he the lowliest of them all, I would remain her with him." When his brothers declared that one could renounce the primacy of the pope without denying God, he showed them that he who separates himself from the pope, separates himself from the Church; and that he who renounces the Church, renounces Christ the Lord. And then he spoke with holy zeal: "I would rather endure death for the honor of God than swerve even a hair's breadth from the Catholic Faith."

Eight days later the confessors were taken to Briel, where the Calvinist leader had his headquarters. He had them all hanged there on July 9, 1572. With Christ they shared the disgrace of shameful death, but at the same time also a glorious ascension. In 1867, at the solemn celebration of the day on which the holy Apostles Peter and Paul suffered martyrdom, Pope Pius IX canonized the martyrs of Gorcum.