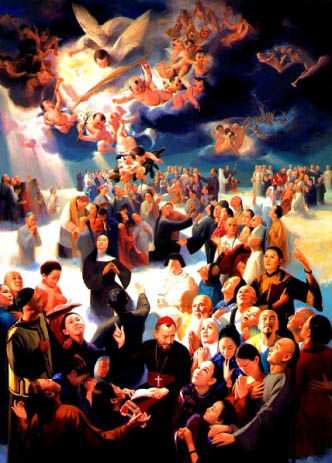 
About 25,000 Catholics in China and 43 European missionaries won the martyr's crown during the so-called Boxer Persecution of 1900. The Boxers were a fanatical sect who hated all foreigners and especially the Catholic Church. With the approval of the empress dowager Tzu Chi, then ruling the Chinese Empire, they went about burning churches and murdering missionaries and their neophytes.

One of the principal promoters of the Boxer rebellion was the governor Yu Hsien who resided at Taiyuanfu, Shansi. In this city was also the residence of the Franciscan Bishop Gregory Grassi, vicar apostolic of northern Shansi, and his coadjutor, Bishop Francis Fogolla. Here were also a seminary and an orphanage. The latter was conducted by Franciscan Missionary Sisters of Mary who had arrived only the previous year.

During the night of July 5, Yu Hsien's soldiers appeared at the Franciscan mission and arrested the two bishops, two fathers and a brother, and seven Franciscan Missionaries of Mary. Five Chinese seminarians, and eight Chinese Christians who were employed at the mission were also apprehended. In prison they were joined by one more Chinese Christian who went there voluntarily.

Four days later, on July 9, 1900, all of them were taken before the tribunal of Yu Hsien, some of them being slashed with swords on the way. Yu Hsien ordered them to be killed on the spot, and an indescribable scene followed. The soldiers closed in on the prisoners, struck them at random with their swords, wounded them right and left, cut off their arms and legs and heads. Thus died the 26 martyrs of Taiyuanfu, martyrs of China, of whom all except three belonged to the First Order and Third Order Regular and Secular of St. Francis. They were beatified on January 3, 1943.

Five of the martyrs of China were Franciscans. Besides Blessed Gregory Grassi, who was 68 years old, and Blessed Francis Fogolla, there were Blessed Elias Facchini, a priest from Italy, Blessed Theodoric Balat, a priest from France, and Blessed Andrew Bauer, a lay brother from Alsace.

Fourteen of the martyrs were natives of China and 12 were Europeans.

Beatified at the same time as these martyrs and commemorated with them on this day are three other Franciscan martyrs who died as victims of the Boxers in the province of Hunan. All three were missionaries from Italy, a bishop and two priests.