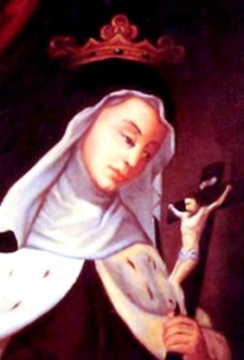 Jane, the daughter of the wealthy baron of Maille, was born at the chateau of her father near St Quentin in France. Because she possessed from her earliest youth a tender devotion and love for the Blessed Virgin Mary, she was given the additional name of Mary at confirmation, and from then on she always used it with her baptismal name. Under the direction of a Franciscan, who conducted the divine services at the chateau, she strove earnestly to attain perfection. Self-denial, mortification, prayer, and works of charity towards her neighbor were the special means she employed.

Blessed Jane Mary of Maille was scarcely fifteen years old when her father died. Jane Mary was placed under the guardianship of her grandfather, who was already quite advanced in years, and who therefore believed it his duty to see his grandchild settled in life as soon as possible. He chose as her husband Baron Robert of Silly, a man who was noble both by birth and by virtue. On the evening of their wedding day the grandfather died suddenly. This made such an impression on the pious husband that he readily yielded to the wish of his young wife to live in virginity.

The young couple’s first concern was to order their household in a Christian fashion. Only virtuous and God-fearing persons were admitted as their servants; all had to observe the commandments of God and of the Church faithfully; frivolous conversations, cursing and swearing, as well as games of chance, were not tolerated. In everything their master and mistress set the best example. Jane Mary interested herself also in all the needs of her people, and never sent a needy person away from her door without giving him assistance.

But the cross is the real test of all true fidelity towards God; and it was not to be wanting in this house either. A terrible war broke out between England and France. The Baron of Silly and his vassals took the field in defense of their country, but the war was disastrous for France.

Mortally wounded, the baron was brought to his chateau; but hardly had he arrived there, when the English took possession of it and led him away as a prisoner. Through the efforts of his faithful wife, he obtained his freedom; but he died not long afterwards.

Now Blessed Jane Mary of Maille withdrew entirely from the world. She left her vast possessions in the hands of relatives, while she moved to a little house near the Franciscan church in Tours. Dressed in the ash-grey habit of the Third Order, she went out to nurse the sick and the poor; the remaining time she spent in prayer.

Jane Mary of Maille prayed especially that God might bless the labors of priests, particularly those who preached the divine word. She prayed most of all for the universal Church, which at that time had to endure one of its severest trials. Christendom was divided into two groups – one pope resided in Italy, another in France, and even saintly people did not know which one was the rightful head of the Church. Confusion and many scandals were the inevitable results. Had the Church been the work of human hands, it must certainly have gone to ruin. In answer to the prayers of many pious souls, God came to the assistance of the Church, and Jane Mary had the consolation before her death of seeing the Church again united under one head.

Blessed Jane Mary of Maille died in the year 1414, at the age of eighty-two years. When her remains, clothed in the habit of the Third Order, were brought into the church, the body appeared to have the freshness of youth. The veneration paid to her since her death was approved by Pope Pius IX.