Institution of the Angelus 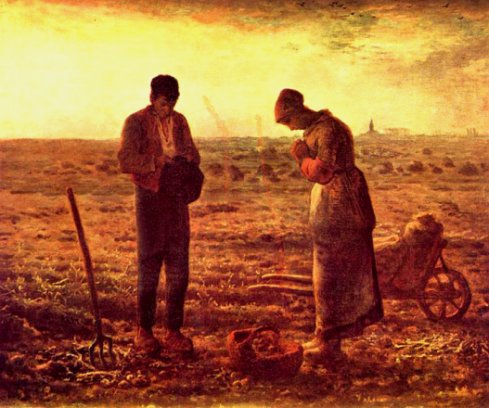 
The institution of the Angelus occurred June 28-29, about 1456 by Pope Callistus. The Turks had been threatening Europe and it was the Pope’s request that the Faithful recite the Angelus for the safety of Christendom against the Turks, and for peace. The Angelus was first recited about sunset, a general practice throughout Europe in the first half of the 14th century, recommended by Pope John XXI. The morning Angelus seems to have started somewhat later, again, for peace. The recitation of the midday Angelus began sometime in the 14th or 15th century; it was called the “Peace Bell.”

This present-day custom of reciting the Angelus is a short practice of devotion in honor of the Incarnation, repeated three times each day, morning, noon, and evening, at the sound of the church bell. It is curious how the Angelus is associated historically with the invasion of the Turks, again, in 1683, when they laid siege to Vienna. Emperor Leopold of Austria fled and begged for assistance and help from John Sobieski, a great Polish general, who gathered his army and hastened to the rescue, stopping at one of Our Lady’s shrines in Poland for blessing.

On September 11, Sobieski was on the heights of Kahlenberg, near Vienna, and the next day engaged in battle with the Turks. Brilliantly leading his troops, he forced the Turks into a trap, but the number of the foe was so great that he could not penetrate their ranks; then Sobieski’s cavalry turned in retreat, interpreted by the Turks as flight. The Turks rushed forward; but were re-attacked. The shouts and cries of Sobieski’s men threw terror into the Turks, when they learned that Sobieski himself, “The Northern Lion,” was on the battlefield, for he had defeated the Turks in Poland on previous occasions, and they feared him; therefore, the Turks fled panic-stricken. The battle raged for a time; all along the front was Sobieski everywhere commanding, fighting, encouraging his men and urging them forward. The Turks were finally defeated, Vienna and Christendom saved, and the news was sent to Pope Innocent XI at Rome.

Institution of the Angelus

Sobieski was a humble man, for in the height of his greatest victory, in a letter to Pope Innocent XI, he said it was God’s cause he was fighting for, and Mary’s honor. His message to the Pope on the victory read: “I came, I saw, but God and Mary conquered.”

The day after the Battle, Sobieski entered Vienna victoriously. Later he pursued the Turks into Hungary, again attacking and defeating them. The Turkish threat to Europe had vanished forever, or at least until the 21st century. Pope Innocent XI, after the battle of Vienna, requested the whole Christian world to recite the Angelus for peace. The Angelus takes on special significance today because Communism has duplicated, in many respects, the pattern of the Turkish invasion of Europe. In our own time, we see the peaceful Moslem invasion of Europe, which once again, Poland is resisting.

The 500th anniversary of the institution of the Angelus by Pope Callistus III, was a reminder to recite the centuries old prayer for peace and for the protection of the Christian world from the Red menace of Communism and the enemies of Western Civilization.

The Institution of the Angelus