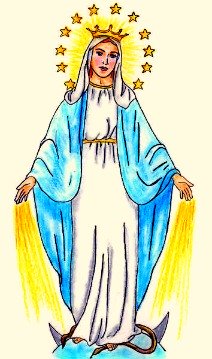 June 25: Divine Motherhood of Our Lady, declared at the Council of Ephesus in 431


In the year 431, the council of Ephesus, which declared that the Blessed Virgin must be called Mother of God. As the Archbishop Cyril stated, “The Word was made flesh” can mean nothing else but that he partook of flesh and blood like to us; he made our body his own, and came forth man from a woman, not casting off his existence as God, or his generation of God the Father, but even in taking to himself flesh remaining what he was. This the declaration of the correct faith proclaims everywhere. This was the sentiment of the holy Fathers; therefore they ventured to call the holy Virgin the Mother of God, not as if the nature of the Word or his divinity had its beginning from the holy Virgin, but because of her was born that holy body with a rational soul, to which the Word being personally united is said to be born according to the flesh.”

The title of Mother of God with which the Catholic Church honors Mary, is not only the source of incomparable greatness in her, it is also a potent means to ground us firmly in the possession of the true Faith, and to bring us to a more perfect knowledge of God.

The Divine Maternity is the starting point of the work of salvation. In believing Mary to be the Mother of God, we believe also that the Word was made Flesh.

A faithful Christian cannot do better than follow the example given us by the Church, which never tires of proclaiming the truth of the Divine Motherhood of Mary to the universe at large. She does this by erecting shrines and churches in Mary’s honor, by the establishment of sodalities consecrated to her, by the approval of religious orders devoted to her service, and by the institution of practices of piety in her honor.

To Mary we can apply the words addressed to Judith of old: “Blessed art thou, O daughter, by the Lord the Most High God, above all women upon the earth.”

The Divine Motherhood of Mary