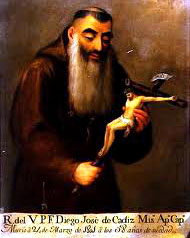 
This humble Capuchin, who could make no progress at school, this "dunce of Cadiz," was later on admired by the world as the savior of the Faith in Spain, as a second Paul, as the apostle of his century.

His lineage dated from the Visigoth kings. After he had taken the habit of St. Francis with the Capuchins in Seville, he had been ordained to the priesthood. Having prepared himself by a holy life, he was appointed to the task of preaching.

Everybody marveled at the singular power and unction of his words, which swayed his audiences and left an impression on their lives. But most astonished of all was the venerable Dominican, Antonio Querero, a fellow student of Didacus, who knew how difficult study had been for him. A child, however, solved the problem one day during a sermon given by Saint Didacus, when he shouted aloud in the church: "Mother, mother, see the dove resting on the shoulder of Father Didacus! I could preach like that too if a dove told me all that I should say!"

And there was the secret. Because of his humility and virtue, the Holy Spirit had converted this unlearned man into the most celebrated preacher in Spain. But how Father Didacus of Cadiz prayed before his sermons! How he scourged himself even unto blood, in order to draw down God's mercy upon the people!

Once when his superior chided him because of the austerity of his life, the saint replied: "Ah, Father, my sins and the sins of the people compel me to do it. Those who have been charged with the conversion of sinners must remember that the Lord has imposed upon them the sins of all their clients. By means of our penances we should atone for the sins of our fellowmen and thus preserve ourselves and them from eternal death. It would hardly be too much if we shed the last drop of our blood for their conversion."

In this disposition he journeyed through all Spain and infused new Catholic life wherever he went. In a very pronounced way he preached the praise of the most Holy Trinity and of the Blessed Virgin Mary.

Honors did not escape him. He was appointed extraordinary consultor of the Church, synodal examiner in almost all the Spanish dioceses, honorary canon, and honorary doctor of several universities. Didacus Joseph of Cadiz died in 1801, in the 58th year of his highly blessed life, and was beatified by Pope Leo XIII.