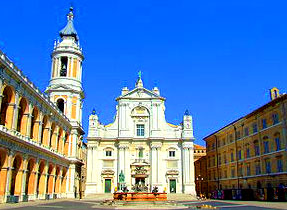 
The church of Loreto, one of the finest in Italy, has been adorned, according to their taste, by the popes, who have often come thither on a pilgrimage like the common faithful; three gates of chased bronze give entrance into the holy temple, in the center of which arises the Santa Casa in its clothing of white marble, adorned with magnificent bas-reliefs, designed by Bramante, and executed by Sansovino, Sangallo, and Bandinelli.

La Sala Del Tesoro no longer displays enough riches to pay the ransom of all Italy; but it has still received, in our days, very magnificent gifts of princes and popes. Among these pious gifts we observe a gold monstrance, enriched with diamonds, a chalice, and a thurible, offered by the Emperor Napoleon to the Madonna; an enameled chalice, set with rubies and aqua marinas, offered, in 1819, by Prince Eugene Beauharnais; another chalice, adorned with brilliants, by the Princess of Bavaria, his spouse; a large cross of gold and diamonds, and a crown of amethysts, rubies, and diamonds, offered in 1816, by the King and Queen of Spain, at the time of their pilgrimage to Loreto; a nosegay of diamonds, offered, in 1815, by Maria Louisa, sister of the King of Spain, Queen of Etruria, and Duchess of Lucca; an immense heart of very fine gold, with a precious stone in the center, suspended from a chain of emeralds and amethysts, the gift of the Emperor of Austria to the Madonna. It would be impossible to enumerate the precious stones and rich presents of all kinds offered by princes and kings, under the simple title of dono de una pia persona, in the register containing the names of benefactors to the Santa Casa. 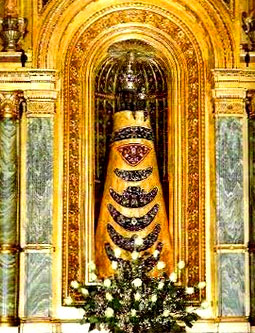 The miraculous statue of the Madonna is thirty-three inches high; it is carved in cedar wood, covered with magnificent drapery, and placed on an altar glittering with precious stones. We are assured that the niche which it occupies is covered with plates of gold. A number of lamps, of massive silver, burn before it.

The beautiful litany of Our Lady of Loreto was the votive offering with which a celebrated Florentine composer, of the early years of the eighteenth century, repaid a miracle of the Blessed Virgin. This composer, whose name was Barroni, all at once lost his hearing, like Beethoven; after having exhausted the succor of art without success, he invoked that of Mary, and set out on a pilgrimage to Our Lady of Loreto. There he was cured, after praying with faith, and in his gratitude to the Holy Madonna, he composed, by inspiration, in her praise, a chorus, which, under the title of Litanie della Santa Casa, was performed for the first time on the 15th of August, 1737. This litany was repeated every year afterwards for the feast of the Madonna; Rossini, happening to pass by Our Lady of Loreto, was struck with the charm of this composition, and is said to have introduced it into his Tancredi (Gazette Musicale).

The front area of the church was constructed during the pontificate of Pope Sixtus V in 1586, and it was he who founded the order of Knights of Loreto, who were a company of knights especially devoted to defend the shores of the Italian Mediterranean against the incursions of barbarians.

The popes have delighted to testify their respect for Mary, by making her miraculous sanctuary of Loreto the object of their devout solicitude. Pope Pius V offered to the Santa Casa two silver statues of Saints Peter and Paul; he did still better by diverting from its natural channel a river, the waters of which, sluggish and in great measure stagnant, sent up the most unwholesome exhalations to the top of the hill, where a small town has been formed, under the shadow of the magnificent church of Mary.

Pope Benedict XIV, embellished this sanctuary with truly persevering generosity, where Pius VII, having recovered his liberty, came to kneel, before his entrance into Rome, and where he left, as a memorial of his visit, a superb gold chalice, with this inscription: “Pius VII, sovereign pontiff, restored to liberty on the day of the Annunciation of the Blessed Virgin Mary, and coming from France to Rome, left at Loretto this monument of his devotion and gratitude.” His holiness Gregory XVI also made a pilgrimage to Loreto.

April 18: Pope Urban VI granted a plenary indulgence to those who visit the Church of Our Lady of Loreto (14th Century)

May 9: Our Lady of Loreto, Ancona, Italy

The Abbot Orsini wrote: “The chapel is the house of Nazareth, where the mystery of the Redemption was announced.”