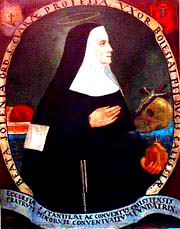 
Blessed Yolanda of Hungary was the daughter of Bela IV, King of Hungary. Her mother, Mary, was the daughter of the Greek emperor of Constantinople. In the year 1240, when Yolanda was scarcely five years old, she arrived at the court of Poland. Her elder sister, Blessed Kinga (Cunigunda), who was married to the duke of Poland, had asked to supervise the child's education. Under such a mistress, Yolanda grew not only in age, but also in virtue and grace before God and men.

When Yolanda arrived at young womanhood, she was married to Boleslaus, the duke of Greater Poland. But the young duchess was not enamored of the glory and pleasure of this world. It was a greater pleasure for her to do good in her elevated position. Like a true sovereign, she came to the assistance of the poor and sick, the widows and the orphans. She and her husband built hospitals, convents, and churches, and she was so great an inspiration to him in everything that was good and pleasing to God, that he received the surname of the Pious.

But Boleslaus was soon to receive the reward of his piety in heaven. After his death and after two of her daughters were married, Yolanda and her third daughter left all the glamor and riches of the world and withdrew to the convent of the Poor Clares at Sandec, where, devoted to prayer and mortification, she led a life entirely hidden in Christ. Disturbances resulting from war compelled her after a time to move to the convent at Gniezno, which she herself, assisted by her last consort, had founded.

In spite of the reluctance to which her humility prompted her, she was advanced to the position of abbess. So successfully did she guide her sisters by word and by example in the practice of all the religious virtues that the convent flourished like a new garden of God. Even beyond the walls of the cloister she did very much good, so that the fame of the holy abbess spread far and wide.

Notwithstanding all her fame, Blessed Yolanda of Hungary remained entirely devoted to the interior life, as her vocation required. Her favorite devotion was meditation on the sufferings of Christ, during which the Divine Savior once manifested Himself to her under the appearance of the Crucified to announce to her that He would soon lead her to glory.

Attacked by a serious illness, Yolanda asked to receive the last sacraments. Then she admonished her spiritual daughters to persevere in fidelity to the holy rule, and departed blessedly in the Lord in 1298.

After her death Yolanda appeared in wondrous glory, together with St Stanislaus the bishop, to the sick abbess and restored her health. Many other miracles occurred at her grave down to our own time.

Pope Leo XII, in 1827, approved the veneration given to her.