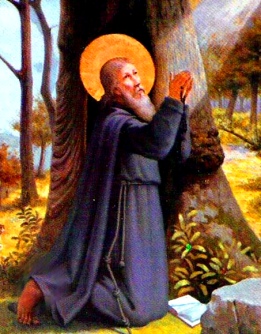 
Blessed Waldo, called also Vivaldo or Ubaldo, was a disciple of the saintly Tertiary priest Bartolo. They were natives of the same place, San Gimignano, in northern Italy. When Bartolo was attacked with leprosy and betook himself to the leper hospital near San Gimignano, Waldo offered him his services and for twenty years, until the death of Bartolo, rendered him every possible kindness. In return Waldo received salutary instructions toward progress in Christian perfection from the holy priest, and at his advice joined the Third Order of St Francis.

After the death of his spiritual father in 1300, Waldo resolved to withdraw altogether from the world and the association of men, in order to converse only with God and live for heaven. He repaired to a large forest several miles distant from his native town. There he found a hollow chestnut tree of great girth, the cavity of which he turned into a cell for himself; he had hardly room enough to kneel in it. There he meant to spend the remainder of his life. Severe penances and the contemplation of heavenly things were his occupation.

Records indicate that Waldo spent about twenty years in this complete solitude. Then one day in May, 1320, the bells of the adjacent village of Monteone began to ring of their own accord, to the amazement of the people. They all ran to the church. There they saw and heard the bells continue to peal although no human had was setting them in motion.

Presently a hunter came out of the forest, who told that his hounds had circled around a hollow chestnut tree, barking in excitement. When he went to investigate he found a recluse in the tree dead on his knees. As the hunter finished his tale, the bells ceased ringing.

The inhabitants of Monteone recognized in this incident the holiness of the deceased hermit. In procession they went to the narrow cell of Blessed Waldo, and brought the body to the church, where it was laid to rest beneath the high altar. God glorified the tomb with many miracles. The cell in the tree was converted into a chapel in honor of Our Lady, in connection with which a Franciscan convent was later built.

*from The Franciscan Book of Saints, Fr. Marion Habig, OFM