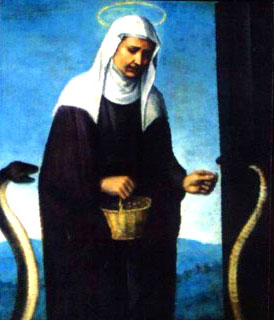 Blessed Veridiana was born in the year 1182 at Castelfiorentino, near Florence, of the noble family of the Attavani. Her vocation to a higher life was discernible even in her youth; she loved seclusion, prayer, and works of penance. As she advanced in years, she grew in grace, and her innocence and virtue won for her the love and veneration of everyone with whom she came in contact.

As a young girl, Veridiana was sent to the home of a relative to assist his wife in the administration of the household. Here she displayed good sense that was quite extraordinary for one of her age. She also utilized every opportunity to practice works of charity.

Once in a famine she distributed to the poor a great quantity of beans from the storerooms, not knowing that they had already been sold by her uncle. When the buyer arrived to get them and the bins were found empty, her uncle reproached her bitterly.

Blessed Veridiana, deeply grieved, prayed all night long, and lo, in the morning the bins of the storeroom were again filled to the brim.

The news of this miracle spread far and wide, and in order to avoid the marks of respect that were being shown her on all sides, she undertook a pilgrimage to Compostela, in Spain, to the grave of St James the Apostle, and later also to the tombs of the Apostles in Rome.

Upon her return home, Veridiana had an anchorage built hard by the chapel of St Anthony in Florence. The cell is preserved to this day. It is ten feet long and three and a half feet wide. For furniture there is only a ledge, a foot wide, projecting from the stone wall and serving as a seat. A small window in the cell opens upon the chapel. Through it she could attend Holy Mass and receive Holy Communion as well as the necessary bodily nourishment.

Blessed Veridiana was only twenty-six years old when, with a crucifix in her arms and escorted by her spiritual director and a great number of people, she entered the narrow cell and permitted the door to be immediately walled up. In this voluntary retirement she spent the remaining thirty-four years of her life as an anchoress in prayer and severe penance. In summer her bed was the bare earth; in winter she lay on a board with a block of wood serving as a pillow. Her food consisted of bread and water and herbs. Her only living associates were two large snakes which crept in and out of her cell, with whom she shared her food and her dwelling, in the spirit of penance, for many years.

About the year 1222, when St Francis was preaching penance in the vicinity of Florence, he also went to visit the poor anchoress, gave her the habit of the Third Order and many beautiful lessons on the proper way to live a contemplative life.

After a very saintly life in which she had been granted the gift of miracles, Veridiana was also privileged with the revelation concerning the hour of her death. She prepared herself with the devout reception of the holy sacraments. While praying the penitential psalms she died on February 1, 1242, being sixty years old.

Moved by the extraordinary miracles that had occurred, Pope Clement VII approved the devotion to her in the year 1533, and later on Pope Innocent XII added his approbation in 1694.